Series: Vampire Elite Volume 1( Prophecy and Keepers of the Key)

Book Blurb: What will he do if saving his people means destroying the woman he loves?

A millennia-long war between two immortal races is about to come to an end. Long ago, the Vampire Elite began capturing the immortals called the Amiti, attracted by their unique blood properties. Now most Amiti live in underground cells, forced to serve as vampires’ bloodstock. The few surviving free Amiti, preparing a final strike, have declared their Queen a traitor. Her execution makes possible the rise of a new Queen, her young daughter Arianna, who will inherit her mother's mystical powers. Working with the Keepers of the Key, Arianna may be able to eliminate the vampires, once and for all, from the face of the earth.


and she's ready to fight to the last drop of her blood.


But the King of the Vampires has other plans.
What neither expects
is the passion that erupts between them.

You’ve managed to restore my hope in the future of vampire books ...
... a fascinating read and definitely a book for anyone who loves fantasy, romance and of course vampires.… a spellbinding novel of action, suspense, romance, and conscience ...  character development is superb ... the type of book that will make you read all day until you get to the end! It is deliciously addictive! 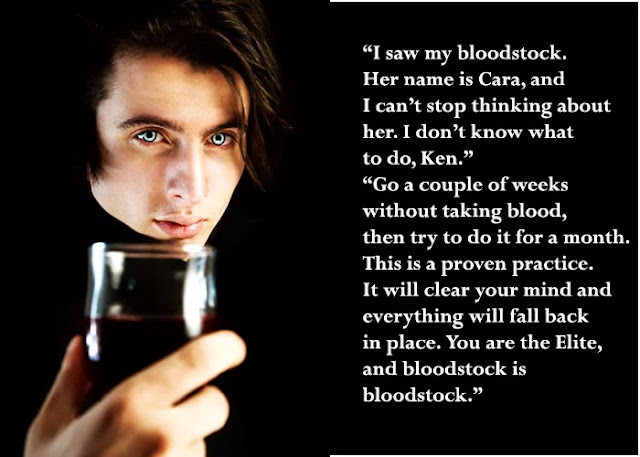 Odji is part of Vampire Elite from the beginning: as one of Tor’s adopted sons, he joined the Royal pride as a child, and has grown up to be one of the King’s bodyguards, often assigned to keep an eye on the princess, Simone. But everything changes for Odji when he sees Zlata, a golden-haired Amiti who is about to be sacrificed to the goddess Sekhmet. Naturally, he pulls off a heroic rescue, and the two become a classic example of the blood-bond pull, totally absorbed by the love and passion that emerge between them. But when they begin to discuss their values and beliefs as Amiti and vampire—as they must, given their situation—they find themselves in a stalemate. How can they resolve the impasse between them, when it’s a reflection of a problem so much bigger than the two of them?

When we’re asked to summarize Vampire Elite, it’s hard not to gravitate toward Arianna and Tor, but we think that the richness of the story as a whole comes from not allowing the focus to land single-mindedly on the vampire King and the Amiti Queen, but instead drawing on the strengths of an ensemble cast, so to speak. In a way, the story of love in the face of the vampire-Amiti conflict is a classic along the lines of Romeo and Juliet—but because it’s on a larger scale, we need to see a variety of couples who find different ways to make their love overcome—or, for that matter, not overcome—the enmity between their peoples. Zlata starts out as the Amiti version of “just a girl in the wrong place at the wrong time,” but her role expands as events unfold and she takes up the challenges that cross her path. Her relationship with Odji adds yet another dimension to her development. Odji starts off in a much more powerful position and is totally blindsided by his sudden need to be with Zlata. Their story is like and unlike those of both Tor/Arianna’s and Anock/Cara’s, as well as those of other couples that populate Vampire Elite, so as we watch their story unfold on its own terms we’re also given insights into those characters and couples who are having parallel experiences.
Let them speak for themselves.
Excerpt
Zlata slowly walked toward him. The blood had reached her feet and she could feel the wet trail she was leaving behind her. Tossing her hair aside, she arched her back to give him a better view of her breasts and the thick stream of blood running down her body. She watched herself through his eyes; his vision had narrowed, leaving him aware only of her bare skin and her blood. All his senses and instincts were urging him to launch himself at her, but he held back. His willpower was like steel.

“What are you waiting for? Are you just going to sit there and let me die?”

She didn’t have to enter his consciousness to see that he was marshaling every ounce of strength left in him. He stood up and locked his eyes onto hers, a predator stalking its prey. Zlata had to fight the impulse to run away screaming. She swallowed her dread.

Odji dropped to his knees in front of her and wrapped his arms around her waist, pulling her closer to him.

“So you think I can’t resist you, that you’ve trapped me. What if I leave you like this, bleeding? You understand that you’ll die from the blood loss, right? I won’t allow humans to interfere until the last drop of your blood leaves your body, and then I’ll lie down next to you and die as well.”

This book has landed itself in my favorites list. Not just because vampires are involved. Ok, let me not lie….heehee, yes I have a soft spot in my heart for vampires but this book could completely stand on its own with its story line and characters. The author’s keeps you engage from the beginning.  You are gripping your seat tightly because you are in blood lust and there is nothing you can do about it.

I feel like I was reading the vampire novel of Romeo and Juliet. Two halves that are suppose to be whole but there was so much interference with one race wanting dominion over the other and while the raging war between the races exists, I am torn because I have built an alliance even with the villains.

The love story that lies in this plot is sucking every drop of blood that I have in my heart because it is so heartfelt but there are times when the emotions of the characters are just pulling me in  different directions. There are moments when my heart rate is fast, times when it is slow and then the betrayal that just cut me deep on so many levels, I just couldn’t take it anymore but I could not put this book down.

I felt for Arianna because everyone wanted to use her to gain the upper hand over the other races and all the while her one major concern was to save her dying race but everything is not always what it seems and she has to figure out a way to get the Amiti and the Sekhmi to at least live at piece with each other.

The story takes you right on the battle front and the action is pulling you deeper and deeper into the story because the plot is taking an unexpected turn. Allies become foes and decisions are changing the path of the war and all the while you’re left trying to figure who is going to prevail as victorious.

There are so many elements in this story that you’re completely drowned in it. These characters in the book had personality and the author writing style was kept you salivating for more especially when you got to the romance scenes.  This book completely gave me everything I expected, hot vampires, action, attitude and romance that was completely of the chart.

I rated this book 41/2 out of 5 Purple Rant hearts and would recommend this book to vamp lover every where. 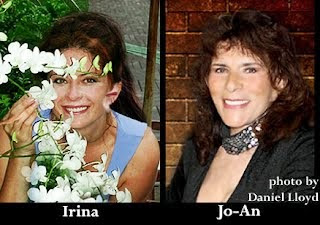 Irina’s world is dark. She works as a clinical psychologist in a Juvenile
Correctional Facility dealing with the extremes of human behavior on a
regular basis and takes care of her paralyzed husband who suffered a stroke several years ago. To bring light into her life she writes. Writing has always
been her passion. She is originally from Russia where she was employed as
a TV journalist.

Jo-An is a Leo, a lioness who has emerged to follow her dream, to someday
write a book of her own. She owned a costume shop for 15 years and was
able to satisfy and excel in her creative nature. She is an over-achiever and
believes that anything is possible if you believe in yourself and ignore the
nay-sayers. Her philosophy is based on Shakespeare "It is not in the stars to
hold our destiny, but in ourselves." She currently resides in California with
her 5 cats and 1 husband.