Once Upon a Darkness Book Tour Interview, Review and Giveaway

Title: Once Upon a Darkness

Blurb: Gretchen and her twin brother, Hank, were abandoned to a zombie horde when they were five years old. Intended to be a sacrifice by their zealot parents, they were instead rescued by The Company. Raised to become soldiers in the war against zombies, they now provide safe passage through danger zones, one contract at a time.

Clint's only skill is war, but he's weary of killing other men. When his contract with the Marines runs out, he takes a job on Gretchen's team, hoping that the search-and-rescue life will suit him better.

On Clint's second day, their four-man team is attacked, drugged, and taken to a prison full of frightened civilians. The only way in or out is by helicopter and, here, their enemies are human. One by one, the captives are culled from the holding area. Rumors say the facility director uses the prisoners as experimental subjects for the testing of a zombie cure.

When Hank is culled, Clint and Gretchen must put aside their personal feelings and find a way out of the prison, surrounded by thousands of starving zombies, before Hank becomes just one more disposable guinea pig in the hands of a twisted mad woman.

It was late morning before Clint and Gretchen woke up. They had even somehow slept through the daily drop helicopter. Clint smiled at the sleeping Gretchen, thinking he could get used to waking up with her legs and arms draped across him.

"Contrary to popular belief," Gretchen grumbled. "It's creepy to watch a girl while she sleeps."
Clint shrugged and smiled. "Sorry, I guess I should've just woken you up."
"Like hell. You're better off being creepy." She pulled the pillow from underneath her head and smacked him with it.

Can you tell us a little bit about yourself?


I have a degree in Mechanical Engineering, so I think I came into writing a little bit differently than most authors. I'm a big nerd, but I love sports and hiking. I'm basically a walking contradiction.

When did you first realize you wanted to be a writer?
I'd always kind of dabbled and played around with writing. When I was on a project in upstate New York, I got involved with a local writer's group and one of them told me about NaNoWriMo. I was SURE I couldn't write an entire novel - but I was wrong. And I was addicted.

What are you reading now?
I'm currently reading Gaming for Keeps by Seleste DeLaney. It's a romance novel set at a gaming convention! PERFECT for me :-D

Do you write in any other genre and do you have other pen names?
I also write YA, but have not published any yet.

What inspired you to write Once Upon a Darkness?
I had decided to write a fairytale retelling and was reading through a lot of original fairytales. When I read the original Hansel & Gretel, I was captivated by both the sibling relationship and the cruelty shown by their mother.

Who is your favorite character in this book? And why?
Erik! Haha, it's funny because he's a side character, but he really started to grow on me and now I adore him. He's rough and tumble and totally inappropriate, but I love him.

What would you say is your interesting writing quirk?
I try not to have them because I know writers can get stuck in them. If I notice myself developing certain habits, I kinda force myself not to do that for a while so I don't get stuck.

Is there anything in particular that you found challenging when you were writing Once Upon a Darkness?
It's always tough with a book like this to balance how much romance you're putting in versus how much of the main plot. Thank god for my editor Julie, who helped me balance that out a little more.

Can you tell us anything about your upcoming projects?
I'm currently working on a contemporary romance continuity with some author friends of mine. I can't say much about it yet, but if you go to my pinterest, you will see some hints. People have been asking about a sequel to OUaD ... we'll see ;-)

Is there anything you would like to say to your readers?
Thank you so much for everything! Writers only go through what we do for our readers - y'all make everything worthwhile!

My Rant: Once Upon a darkness was a fun, action packed read laced with romance. What was touching was the characters and their dedication in finding survivors or family members through all the chaos the was going on. When I think of paranormal romance I am always thing of vampires and Greek gods and etc. but I never expected the zombies.  This is m first Zombie book and I love every bit of it.

This was a quick read for me and what made it better was that the characters where interesting they all contributed some great attributes to the book.  The heroine was strong and courage’s and Clint was definitely someone to drool over.  I completely adored and I look forward to reading more of Aria Kane’s work.

I rated this book 4 out of 5 Purple Rant Hearts and would recommend this action packed novella to anyone that loves a good paranormal romance story with zombies, yes zombies. 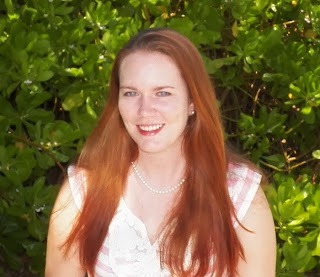 Aria Kane is a recovering mechanical engineer and romance writer. She lives in sunny Florida with a 60 lb mutt who thinks he's a Chihuahua.

Enter the Giveaway Below

To celebrate the release of Once Upon a Darkness, Aria Kane is giving away a Kobo Vox (Android) eReader with a red leather case to one winner (US residents only), and a choice of any Entranced ebook to another winner (international entries welcome).

Email ThisBlogThis!Share to TwitterShare to FacebookShare to Pinterest
Labels: Aria Kane, Author Interviews, Book Tour, Once Upon A Darkness, Other Giveaways, Paranormal Romance