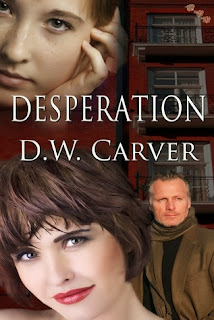 
Synopsis: Kate thought that once her mother died, the pain she had caused would end. Then she discovered that a letter had been sent to a prominent television presenter on her mother’s orders taunting him with the fact that Kate now held photographs which would ruin him and probably lead to his arrest. Suddenly Kate is running for her life. She seeks help from Rob, a much older man whom she has only known for a very short time.

While at his London apartment, she rescues a teenage girl, Vickie, from a street pimp and over the following days finds a bond growing between them that feels like a lot more than friendship; but with both their lives now in danger there is no time for thoughts of anything but escape and survival.

I am D W Carver, English, married with three adult sons and live in a suburb of London. A few years back I was a community mental health counsellor, trainer and (one thing leading to another) lecturer public speaker and talking head of choice for UK radio and television when they wanted something on anxiety disorders and OCD.

I never really enjoyed being in the media limelight but met some interesting people and was put up in nice hotels. I also got to ride in expensive cars and once a stretch Cadillac favoured by a very famous BBC personality. My abiding memory of my media days was that I always encountered somebody – staff or part of the presentation team – who had anxiety problems. It was oddly heartening to see that people we watched and listened to and tended to think didn’t have a care in the world beyond spending all that money, sometimes suffered like the rest of us.

Back then, I spent some of my time writing self-help books and booklets for my employers as our clients often seemed daunted by books available in bookshops and sometimes  couldn’t find data in them relevant to their problem. I never grew tired of being told ‘that was just what I wanted’. Sometimes there was a spoken or hinted ‘but’ at the end of that and I began to test my work with the clients, making sure it was understandable by more than me and the charity staff.  As I have said before and will probably say many times again, that was an excellent apprenticeship for writing novels. I would write and rewrite, refine and simply until the book or booklet was as useful as I could make it.

In the years since, writing novels, I have often thought about those days and gone back over a chapter to make it ‘more readable’. I often have no clear idea what that means exactly but sooner or later the text seems to settle into a pattern that works.

Reviews have been good (try Goodreads and Amazon) and I have been fascinated by what readers have seen in those pages – often things that were not obvious to me. Working in the mental health community as I did for so many years, perhaps my ‘dark side’ is a little darker than average  – I did meet some totally terrifying people – but I am always interested to hear back from readers about my work.

Maybe some of you can be my new ‘client team’ and make me a better writer. Reach me on dwcarver142ATaol.com

Posted by Crystal Rants at 2:24 PM