Book Tour Review: Give Me Reason ( The Reason Series) 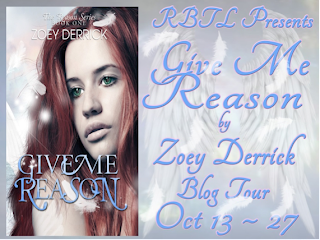 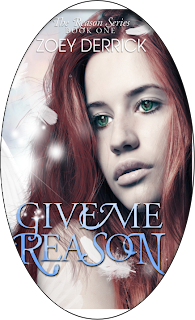 Blurb/Synopsis: Vivienne Callahan has known only hardship. As if growing up with an alcoholic, drug addicted mother wasn’t traumatic enough, she’s escaped from her physically and verbally abusive boyfriend only to struggle every day to make ends meet as a waitress in a Minneapolis diner.

He’s looking down at me, making me feel small at five feet two inches. He has to be at least six feet tall. Broad shoulders. His suit today is gunmetal grey with blue or black pin striping—I can’t tell which. His shirt is a beautiful lavender color with a darker purple tie.
"How do you know I'm not an addict?" I ask, softly.
He smiles at me, warm, genuine. "Because, you've come to return the money I left you last night as a tip." My jaw falls open.


"How"—I swallow hard—"did you know?"
His smile fades a little. "Because, why else would you come down here?"
I close my mouth and look down at the floor. His ability to read me is really scary.
"Since you haven't eaten since last night, I'm going to take you to lunch."
I feel my face flush bright red, both in anger and complete irritation. "That is not why I'm here. I've survived for my entire life fending for myself, I don't need some rich hot shot business mogul buying me food." I reach into the pocket of my bag and pull the folded up paper from it. I thrust it towards him. He refuses to take it. Tears of frustration trickle down my cheeks. "Damn it Mikah, take it." I push it at him again and again he refuses. "I'm not a damn charity case. I don't need your money or your food."
The bell chimes. We’ve finally reached the skyway. As soon as the doors open, I drop the folded up paper with his money in it and bolt from the elevator, turning left, hoping and praying I can get away.
"Vivienne, stop." I hear him say behind me. I keep going, walking quickly but not running. Yet. I'm trying hard to not make a scene.


But he doesn’t seem to care about that. He catches me quickly, spins me around. I grab hold of his arm to catch my balance so I don't go sprawling onto the floor.

Give Me Reason was such a compelling story. I just couldn’t not put this book down and I was broken hearted that I cannot read the next installment immediately. Viv is so broken through the abuse of her childhood and past relationship that it is hard for her to let anyone in. I can’t blame her because if it was me I would be the same way. My heart broke for her and I found that I was very emotional about her wellbeing as an individual and soon to be mom. Life is hard for her. She is working at a dead end job barely feeding herself and has a baby on the way. Viv really needed a break from life its self. Somewhere in the heavens she needs an angel to save her and that’s when Mikah steps on the scene.

Mikah is gorgeous, successful and has a bleeding heart.  I love him as the hero in this series. He is just what Viv needed in order to heal. But the push and pull between both characters is like having heartburn. They need each other but Viv refuses to allow Mikah in, the truth in the matter is that it is for good reason but when she steps over Mikah I want to choke the life out of her. The magic between the both of them is so special and you could feel it through the pages of this book. This electric connection between the two simply makes you heart flutter but what is a good romance without a little heartache right.

As soon as you think that Viv is going to let Mikah in and as she begins to give in a little to accept his help here is the fear of Riley again ripping a whole in the same spot that was slowly healing. I hate Riley with a passion. He complete brings out the bad side of me. Any man that could treat a woman the way her treated Viv deserves to be castrated and thrown in a whole somewhere to rot away. Seriously I despise him.  Ms. Derrick seemed to draw all these emotions out of me.

I was so attached to Vivian and Mikah that when the book ended I was in complete utter shock. I just couldn’t believe that I was done so soon but the ending of the story made me antsy. I need to dive into Give Me Hope. I feel like I was smacked around pacified and left to ponder what’s going to happen next.  Ms. Derrick how could you do this to me.

I loved this story. The authors writing style captivated me and left me breathless. The characters were amazing and I connected with them as soon as I began the story.  You begin to see Viv and Mikah grow intimately, which made the story line exhilarating. I personally feel like this story is some of Ms. Derrick’s best work yet.  She has always been one of my favorite authors but this story shows that she is a literary force to be reckon with.  This book has left me wanting so bad for the next installment to be completed. Ms. Derrick, please Give ME Hope literally. J

I rated this book 5 out of 5 Purple Rant Hearts and would recommend this book and series to anyone that loves a great paranormal romance.

The Reason Series:
1. Give Me Reason
2. Give Me Hope  - Coming Soon 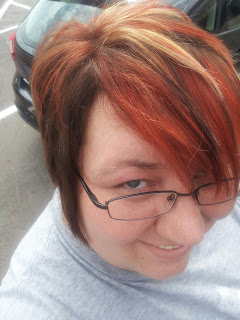 Her stories are hopeful yet true to life, skillfully avoiding melodrama and the unrealistic, bringing her gripping Erotica only closer to the heart of those that dare dipping into it.