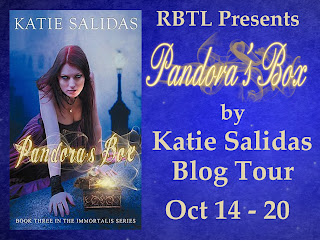 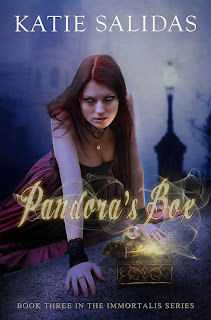 Title: Pandora’s Box
Author:  Katie Salidas
Series:  Immortalis (Book #3)
Genre: Paranormal Romance/Urban Fantasy
Publisher:  Rising Sign Books
Release Date:   July 2011
Goodreads: Add to TBR List
Purchase Links: Amazon | Barnes and Noble | Kobo | Smashwords| ARe
Blurb/Synopsis: After a few months as a vampire, Alyssa thought she’d learned all she needed to know about the supernatural world. But her confidence is shattered by the delivery of a mysterious package – a Pandora’s Box.
Seemingly innocuous, the box is in reality an ancient prison, generated by a magic more powerful than anyone in her clan has ever known. But what manner of evil could need such force to contain it?
When the box is opened, the sinister creature within is released, and only supernatural blood will satiate its thirst. The clan soon learns how it feels when the hunter becomes the hunted.
Apparently powerless against the ancient evil, the clan flees Las Vegas for Boston, with only a slim hope for salvation. Could Lysander’s old journals hold the key? And what if they don’t?
And how welcome will they be in a city run by a whole different kind of supernatural being?
Werewolves…

“You make living with vampires look easy.” I chuckled, watching Fallon—my very human best friend—stake her claim in the den.
Since moving in, Fallon had taken over the empty room in our house, turning it into her own ultra-modern studio apartment: half bedroom, half office space. She’d even begun hanging pictures—something Lysander had never done the entire time he’d lived here. On one wall she’d hung a large abstract painting in muted tones of blue and green. She was well on her way to making the room feel homey and completely separate from the rest of the house.
“I’ve had some pretty scary roommates in the past. You guys are nothing!” She waved a flippant hand in the air, downplaying the strangeness of our situation.

My Rant:
Pandora’s Box was thrilling, I am so freaking emotional right now about this book. There is so much going on. I’m in shock that the story has completely shifted in to something so thrilling that my heart is racing because I needed to find out how the characters would overcome these new issues that arise. There are new characters that are brought into the story, sexy werewolves and ghost. Were the hell did they come from but they sure made an entrance.  Just when you think the clan is going to have some peace a box shows up and through Fallon’s curiosity she opens the box and let loose a vengeful force that wants its blood back.
Lysander thinks he has the answer in his old books that are back in Boston so they make a trip there to get them and the story takes another twisted turn. I am at the edge of my seat. I cannot put this book down I forfeited food breaks and sleep just to make it through the story.  The author simply amazes is me. Just when you think you have it all figured out you really don’t and bam there is a shift in the story that drops your bottom lip in shock. I completely love this story and I am falling in love with this series.  This book complete takes you on an emotional roller-coaster ride that is thrilling, frilling, full of fear and excitement but you have no idea when the heck you are going to be drawn back into the station to get off. The book ends with a cliff hanger and my heart is pounding. Thank the book fairy (Anna) that I have the next book because I do not know if I could live with the anticipation of waiting.
My Recommendation

I rated this book 5 out of 5 Purple Rant Hearts and would recommend this book and the series to anyone that loves a paranormal romance that is full of action.
FTC: Disclaimer: I received this book for free from the author, editor, publisher, or Promo Host. This is my honest opinion about this book and I did not receive any monetary compensation for writing this review nor was I obligated to write a positive one.

Katie Salidas is a Super Woman! Endowed with special powers and abilities, beyond those of mortal women, She can get the munchkins off to gymnastics, cheerleading, Girl Scouts, and swim lessons.  She can put hot food on the table for dinner while assisting with homework, baths, and bedtime… And, she still finds the time to keep the hubby happy (nudge nudge wink wink). She can do all of this and still have time to write.
And if you can believe all of those lies, there is some beautiful swamp land in Florida for sale…
Katie Salidas resides in Las Vegas, Nevada. Mother, wife, and author, she does try to do it all, often causing sleep deprivation and many nights passed out at the computer. Writing books is her passion, and she hopes that her passion will bring you hours of entertainment.
Blog
Facebook
Goodreads
LinkedIn
Publisher
Twitter
Amazon
Amazon UK
ARe
Barnes & Noble
Smashwords