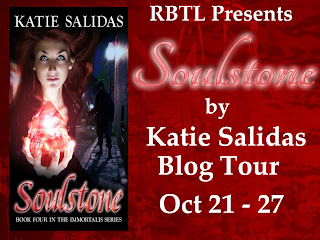 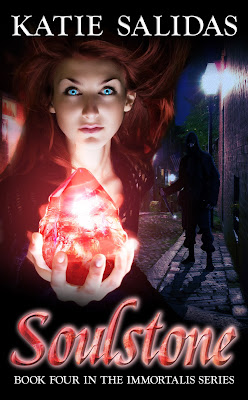 Blurb/Synopsis:It’s a desperate time for rookie vampire Alyssa, and her sanity is hanging by a slender thread. Her clan is still reeling from the monumental battle with Aniketos; a battle that claimed the body of Lysander, her sire and lover, and trapped his spirit in a mysterious crystal. A Soulstone.

Unfortunately, no amount of magic has been able to release Lysander’s spirit, and the stone is starting to fade. Weeks of effort have proved futile. Her clan, the Peregrinus, have all but given up hope. Only Alyssa still believes her lover can be released. In despair, Alyssa begs the help of the local witch coven, and unwittingly exposes the supernaturals of Boston to unwanted attention from the Acta Sanctorum.

The Saints converge on the city and begin their cleansing crusade to rid the world of all things “Unnatural.” In the middle of an all-out war, but no closer to a solution to the dying stone, Alyssa is left with an unenviable choice: save her mate, or save her clan.

Soulstone had me gripping the edge of my seat. This book is just as good as the last three in the series and I can't seem to leave it alone. My heart was breaking because Lysander's soul was still trapped in the stone. Alyssa and the Clan are doing all that they can to release Lysander and it feels like their is not hope for our handsome maker. Alyssa finally results in going to the witches to get help in releasing Lysander's soul and at this point she is the only one with a strong belie that it can be done. The Acta Sanctorum are on the groups tail and doing everything they can to insure that they destroy the wolfs, witches and vampires and their ultimate goal is to get their hand on the box, thats right pandoras box.

I am inthralled with this series. Katie Salidas keeps your imagination going with all the twist and turns in the story.Her characters grab you and at this point you are emotional attached to them. The author takes you on a seat gripping ride and you are at her mercy in this witty series. The immortals series is quickly climbing my favorites list and I am looking forward to reading the next installment to the series.