Review and Giveaway: Revelation of Blood 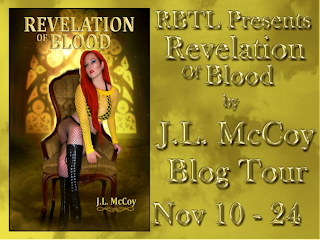 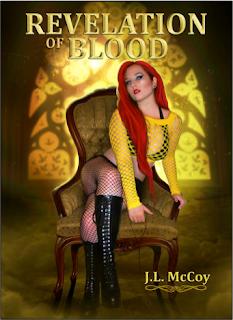 Synopsis: After nearly dying in the battle with the monster Amun, newborn vampire Skye Morrison is more than ready to begin a peaceful life with mate Archer Rhys and their family.

Burdened with guilt by her unresolved relationship with Jameson, Skye tries desperately to mend what was broken and regain their friendship while in Boston for her Sacred Vow Ceremony. A man from Skye's past comes forward and, as the missing pieces are revealed, will she finally feel complete or is she being set up for more heartbreak?

With Skye consumed by the changes in her personal life, a surprising new enemy emerges to take control . Will the unlikely union of her vampire family and werewolf friends be enough to defeat this new threat?

Aces and eights,” I smiled widely as I laid my cards out in front of me.  “Read ‘em and weep boys.”
Donovan, our flight attendant threw his cards down on the table and huffed.  “That’s nine hands in a row you’ve won.”
“Are you hiding cards up your sleeve, little sister?” Jameson winked at me as he laid down his own full house of twos and fives.
I held up my bare wrists and cocked a sassy eyebrow at him.  “And how would you suppose I’d manage that with short sleeves, my dear brother?”
“Card shark,” Archer grinned proudly as he laid down his pair of kings.
We were all sitting around the conference table at the back of the plane, passing time, when Archer’s cell began to ring.  Pushing the speaker button and setting the phone on the table, he resumed gathering and shuffling the cards as he spoke.
“Yes?”
“Hey, boss man,” Quinn’s disembodied voice greeted.  “How’s the flight?”
“Did you know that your new sister here is a card shark?” Archer asked, winking at me.
“Loch had his suspicions,” he chuckled.  “She took six grand from him during last Tuesday’s game.”
“Ah,” Archer sighed, “she’s up seven here.”
“Take my advice, sir, and bow out when you can.” Quinn laughed.
“Advice I could have used an hour ago, son,” Archer chuckled as he doled out the next hand of cards.  “What can I do for you, Quinn?”
“What time do you arrive, sir?” he asked, significantly lowering his voice as it became more serious.  Jameson, Archer, and I took notice and we all glanced at each other.
“We land within the hour,” he answered Quinn.  “Why?  What’s going on?”
“Trouble is afoot at the Circle K, athair,” he said and I felt my eyes widen in disbelief at his pop culture reference.  Who would have guessed he’d seen, and liked, Bill and Ted’s Excellent Adventure?  Quinn was hard and no nonsense and the quote left me dumbfounded.
“Explain,” Archer barked, abandoning the cards as he looked up at Jameson.
“We’ve got Dark Ones at the club and lots of them.  They started arriving last night and by their accents, most of them aren’t from around Texas.  The guys and I didn’t think too much of it until tonight.  VIP is at capacity and 99% of them are Dark.  They’re all over the first floor, too, sir.  I don’t know what’s going on, but I thought I should warn you.  Something doesn’t feel right.”
I frowned and looked from the phone to Archer.  He was staring at me and by the look on his face I could tell he was deep in thought.  “Have Hagan man VIP until we get there.  Tell him not to pick us up.  We’ll catch a cab to the club.”
“Already on it, sir,” Quinn answered.  “I figured that’s where you’d want him.”
“I want everyone on high alert.  Keep your ears open.  I want to know what they’re up to.”
“Do you think this has anything to do with Skye’s kidnapping the other night?” Jameson asked in a whisper and I felt Donovan’s shocked eyes slide to me.
“Most certainly,” Archer nodded as he reached over and took my hand before addressing Quinn again.  “We’ll be there in about seventy minutes, dheartháir.   Call me if anything happens before then.”
“Aye, athair,” Quinn agreed and ended the call.

ALL RIGHTS RESERVED. This book contains material protected under International and Federal Copyright Laws and Treaties. Any unauthorized reprint or use of this material is prohibited. No part of this book may be reproduced or transmitted in any form or by any means, electronic or mechanical, including photocopying, recording, or by any information storage and retrieval system without express written permission from the author / publisher.
*********************************

My Rant: The storyline was emotionally thrilling. Skye and Archer were amazing. You got to see the romance between the two blossom. Skye deserves some happiness and it finally seems like the relief is kicking in because we have seen our heroine go through so much through-out the story, so when she has to face her past your so attached that you can feel the emotions rolling off the pages. The author continues to keep the reader engaged because the plot is spinning out of control and you can't figure out where the outcomes is going to land. I had trouble putting this book down because I wanted to see the skye overcome her past and her new beginning to her future. I enjoyed this book and the series and I would look forward to reading more about Skye and Archer.

Blood of the Son: (Book #1 in the Skye Morrison Vampire Series)

Sins of the Father: (Book #2 in the Skye Morrison Vampire Series)

The Original Sin: (Book #3 in the Skye Morrison Vampire Series)


Legacy of Blood: (Book #4 in the Sky Morrison Vampire Series)

Revelation of Blood: (Book #5 in the Sky Morrison Vampire Series) 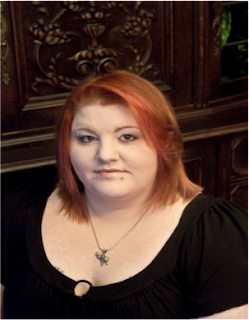 J. L. McCoy resides in the beautifully weird city of Austin, Texas with her opinionated Pekiweenie Isabel and handsome husband Kenny.  She has always been a passionate reader and enjoys watching movies, traveling, listening to heavy metal/classic rock/80s music, getting mani/pedis with her girls, and singing karaoke.  She loves body art and is hopelessly addicted to Sonic’s ice and Route 44 un-sweet raspberry iced tea.