Synopsis: Dyletri, God of Fertility, has locked away his powers. No woman is allowed to touch him, not until he can return his long-dead lover back to life. All he has to do is sacrifice one human girl, a girl who unlocks his powers and rips his dormant lust right out of his body. Trapped by his promise, Dyletri has no choice but to watch Ismini die, no matter how much he wants her.

Yet the darkness of his calling is spiraling within him, demanding he claim the human as his. If he goes back on his promise, the energy of the Fates will cause untold destruction in the Universe. That doesn’t change how Dyletri’s begun exhibiting symptoms that point to more than just lust. How does he allow Ismini to die when she’s come to own him from the inside out?

Desire and torment spiral into something much darker than obsession, more turbulent than an addiction, and something much more brutal than a mere soul-mating. As a war is being rekindled right under his nose, Dyletri will have to come to terms with a destiny eleven thousand years in the making. He thought he’d known what path his future would take, but he’d been wrong. Now the one woman he truly loves might pay the price for his decision.

Blood Flows Deep in the Empire is
the first in a series that will pit free-will against Destiny, Destiny against Fate, and love against brutal desire. Everyone likes to think they have a choice as to who they end up with, but as they rise to face the greatest threat they’ve ever known, even the Gods will learn they have to bend to Destiny’s whim to survive.

This story was so cute and the heroine's of the story were feisty which made this a really good read for me. I mean, I didn't expect the humor at all but it was there and on point. Not only do you have hot gods, they were demanding which was completely sexy. The book surprised me because it started off a little slow but as it progressed the storyline turned into an action pack love story which had my heart skipping a couple of beats. The steamy scenes were completely overpowering and I loved every moment of them because the author made you work for the release but when you got it I swear to you I saw a white light. The storyline was amazing. I have never read work from this authors before and I can tell you this won't be my last time.

I rated this book 3 1/2 purple rant hearts and would recommend this book to anyone who enjoys a paranormal romance with hot Greek God an fiesta heroines. 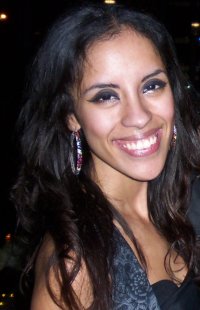 N. Isabelle Blanco was born in Queens, NY (USA). At age 3,due to an odd fascination with studying her mother’s handwriting, she hadalready begun to read and write. By the time she’d reached kindergarten, shehad an extensive vocabulary and her obsession with words began to bleed intoevery aspect of her life. An avid reader in her teens, a fascination withJapanese anime eventually led her to the universe of fanfiction.

Her on again, off again hobby for the next tenyears, She amassed a following of fans that, by her own admission, she wouldnever be able to live without. It was those fans who encouraged her to stepbeyond the fanfiction realm and try her talent in the publishing world.