Troubles and Treats Will Be Released On 11/30/12 and Giveaway News!

Tara Sivec's 3rd book in the Chocolate Lover Series is expected to be released on November 30, 2012, I am so excited about the release of Tara's new book that I wanted to jump in and help spread the word about these amazing books.   I bought Tara's book weeks before I actual read it.  I had no idea of what I was missing out on. Seductions and Snacks was laugh out loud funny from the first to the last page. The folks in my house wanted to smack me silly because I was interrupting their quiet time in the house. LOL :-) when I found out that Tara did a sequel to seduction and snacks I immediately had to buy it an boy was Futures and Frosting's just as funny. Please check out my review on Seduction and Snacks and Futures and Frosting's by clicking on the links.  (Please don't forget to scroll to the bottom to enter Tara Sivec's AWESOME Giveaway)


A BLURB FROM TROUBLES AND TREATS

I thought it would be a bunch of arguing and pointing fingers about whose fault it is that we’re not having sex anymore.

Maybe she doesn't think that’s the problem.  Shit, maybe that isn’t the problem.  Maybe it’s just my problem.  She’s not faking a work injury, she’s not cheating on me…what the hell else could it be?  A few years ago she cut me off from sex for a week because I gave her a Dutch Oven in bed one night.  While hilarious, it’s never a good idea when your wife is naked and getting ready to mount you. There was another time when I gave her a Wet Willy when she started coming.
That wasn't meant to be hilarious, I read about it in Cosmo.  When she locked me out of

the bedroom I grabbed the magazine and realized two of the pages were stuck together -
sex tips and practical jokes.  Well played, Cosmo.  Well played.

SYNOPSIS
Drew and Jenny have spent years being the envy of their friends with their out of control sex lives - well, not really. Mostly it makes their friends want to throw up in their mouths a little. With two little kids and two busy lives, for the first time, Drew and Jenny aren't on the same page in the bedroom. Drew will stop at nothing to get his previously amorous wife back in the sack and Jenny will do anything for a full night of sleep. Carter and Claire, and Jim and Liz are their usual (un)helpful selves and are full of advice for the disconnected duo, wanting nothing more than to help restore order to the usually happy couple's lives. In the third and final installment of the Chocolate Lovers Series, will Drew and Jenny find the spark that's been missing in their marriage, or will the trouble they're having cause a stickier situation than the time Jenny poured honey all over Drew and he fused himself to a tree? 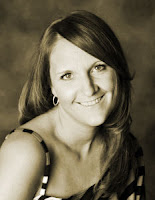 Tara Sivec is a best selling author, wife, mom, chauffeur, cheerleading coach, soccer coach, babysitter, short-order cook, genius and albino squirrel hunter. She lives in Ohio with her husband and two kids. In her spare time she likes to read, write and cover things in chocolate. Most of her material comes from real life experiences with family and friends. Lucky for them, the names have been changed to protect the innocent (aka, drunk).


a Rafflecopter giveaway
Posted by Crystal Rants at 3:00 AM