Skin In The Game Book Tour and Review

Book Blurb: Angela Peterson was always the quiet, shy kid growing up in Harper Falls, crushing on the high school quarterback and honing her football strategy skills. Now grown up and coaching the high school team, she’s shocked when that same sexy quarterback returns to Harper Falls asks her back to his hotel room. And then tries to steal her job.

Injured NFL quarterback Cade Reynolds is in Harper Falls to take over as interim head coach, and he never thought the tall, blond bombshell he propositioned would offer up any resistance. Not to a repeat of the amazingly wild night they shared and certainly not to his coaching position.

But the Harper Falls High Eagles are Angie’s team, and even the hometown hero won’t take that away from her, no matter how hot he is. As the two engage in a battle of wits and wills, this is one game neither is prepared to lose.

Angela was strong, independent and smart. She worked hard to get where she was in her career and she would destroy anyone that stood in her way. But what I liked most about her, as a character was that she was real with herself and the people that are around her. But when her childhood crush comes back into town that completely knocked her off her game especially when she realizes that he is infatuated with her.

The romance between the characters kicks off at the beginning of the book and it seems that their relationship is going to be a smooth sailing until the author throws a twist into the plot, which completely throws you off guard. Cade and Angela are squaring off at each other and it doesn’t help that they both have their own personal issues to deal with.

Cade want to get his career back on track with the NFL but cant help but keep his promise to his coach and longtime friend but in keeping his promise he has to do the unthinkable and keep Angela at bay when he wants her so bad. How Ironic is that.  Angela on the other hand, dream is to be the head coach of the Harper Fall Eagles but Cade is in her way. She loves and hates him but she cannot deny the chemistry they have between each other but she is not going to give in to Cade who is now the man than stands in her way to completing her dream.

This author completely keeps you attached to the book. You are reading the POV of both characters so you know how they feel about their issues, obstacles and infatuation with each other. Which was just amazing. I felt like I was getting the best of both worlds. She pulls you into to the characters where you are immersed in their lives, you feel what they feel and you connect with the characters immediately. I enjoyed the authors writing style and I completely loved the story from beginning to end.

I rated this book 4 out of 5 Purple Rant Hearts. I loved this story and would recommend this book to anyone that enjoys a contemporary romance with two strong characters and some skin ( literally) in the game. 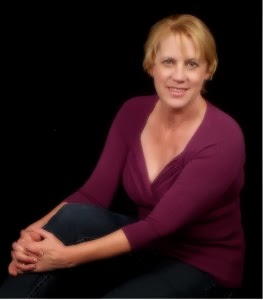 I can’t remember a time when I didn’t want to be a writer when I grew up, but there were plenty of times when I wasn’t sure I ever would be. As it turns out, it just took me about twenty years longer to grow up than I expected!

On the road to publication, I took a few detours, including a stint in academia (I hold an MA in Classics from the University of Chicago and was a recipient of a Mellon Fellowship in the Humanities) and many years as a technical writer/instructional designer for a data processing company. I still hold my day job in instructional design, but my true passion is writing steamy romances–both historical and contemporary.

I learned to believe in love at first sight when I met the man of my dreams twenty years ago and to believe in happily ever after when I married him. I live in Southern California with my husband, our three children, and an ever-changing menagerie of pets.

I am represented by Kevan Lyon of the Marsal Lyon Literary Agency.