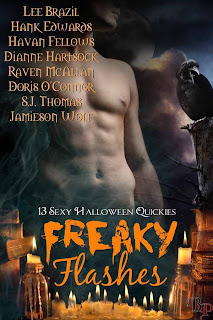 Formats Available In: All eBook formats

A newcomer to town follows urban legend to the cemetery- is he a willing sacrifice, or an unfortunate dupe?

The Sum of His Parts by Hank Edwards

Scott Tallow awakens in a hospital, stitches holding him together. As a handsome doctor helps him heal, Scott comes to realize he's not quite himself.

Writing is a Socially Acceptable Form of Schizophrenia by Havan Fellows

Almost everyone has an interesting story to tell. I've got numerous—and they've declared war against me.

That Special Feeling by Raven McAllan

Can you carve your future happiness in a pumpkin?

Love is powerful, but is it strong enough to raise the dead?

Make me a Sandwich by Lee Brazil

When his roommate is away, distraction is just a horror movie away for Gregory...until the things that go bump in the night take over.

Can Arabella reach sanctuary, or will her dreams become reality?

Spin the Bottle by Raven McAllan

Aeons ago, Attric had been banished in disgrace. Halloween gave him the chance to redeem himself. Would he? Or was he doomed to live in a bottle forever?

The Birthday by Dianne Hartsock

Every birthday Cyrus visits the dance clubs with a surprise for the young men. This year, the tables are turned.

Hunted through the night by a terrifying creature a young girl refuses to give up, but her strength will be her curse.

As a new Reaper of Souls, Kale knows who Death is. He just isn't used to Death showing up in his dreams. When he does, Kale learns that attraction, even in dreams, can be very real indeed...

The Fog by Lee Brazil

Starting afresh in a new home in the valley should have helped Jeff leave memories of his lost love behind. Instead his dreams are filled with a passion that is terrifying in the light of day.

In the Shadows by Dianne Hartsock

He waits in the shadows; silent, hungry. Careful! He might be watching you.

His squirming movements created unbearable friction, and I traced a hand down the tight denim to capture a taut buttock and hold him still against me while I thoroughly explored the wet cavern he’d granted me access to.

I drew away and stared down at him. “I wanted to do that the first moment I saw you at my resting place.”

Awakening at moonrise to find such a tempting morsel in my tomb had been a delicious surprise. His flight across the graveyard had been invigorating.

“Yeah.” His breathy agreement made me smile again