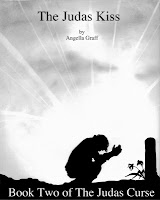 Book Blurb: Judas’ Kiss haunts him 2 millennia into his unending existence. Torn between petty gods and their hunger for power, a faithless police officer slips further into machinations that have already cost the life of someone he loved. Mark’s story finally begins to unfold in the newest volume of Angella Graff’s well received series: The Judas Curse.

Just as Detective Ben Stanford is ready to put the past at rest, he’s pulled down once again into the chaos of gods, theology, and mystery. Told that his sister is alive and the two immortals, Mark and Judas, have been kidnapped by the treacherous goddess, Nike, Ben must find a way to rescue the pair before she can harness their powers.

While Mark waits alone, forced to write out the story of how their powers came to be, and Judas lay tortured by the angry Goddess, a reluctant Ben must enlist the help of an unwilling being from the ancient Norse Pantheon.

Time is ticking, and the hard-headed detective must use everything he learned in the past to prevent another disaster, which could potentially wipe-out the human race.

Excerpts:
I had one chance, and that was to beg Yosef to take me in. When my grandfather couldn’t find me, he’d eventually leave Alexandria and I would be free. I couldn’t live in the Senate and debate with those horrible old men about things I didn’t know or didn’t care about. I wanted to be free to learn everything, to take my place in my life with the people I chose, and I couldn’t have it any other way. Any other way, and I would die.

It wasn’t long before my grandfather retired for the night; he was very old and when he slept, he didn’t hear me creep out the front door and hurry down the street. It was late, the moon was shining full overhead, and I navigated my way through the streets with ease.

I knew the house of Yosef would be asleep, but I was counting on Yosef to be working fierce into the deep, early morning hours. I could hear the rough scraping sounds as he rubbed down wood as I turned the corner. Bypassing the front door, I crept to the side and around to the back where he was.

He was working by moonlight, the full moon providing him with exactly what he needed, and as I stepped up to the table, he startled. "What are you doing here?" he hissed when he realized it was me. "Makabi, do you realize how late it is?"

"My mother died," I said miserably, and for the first time since she’d gone, I cried. I was just a small boy right in that moment, letting my sack slide down my leg and I crumpled to the ground.

Yosef came around the table and picked me up, holding me tight as I sobbed, feeling her loss, grieving for the loss of her life, and the loss of the future that I had so desperately wanted. "Hush now," he said, rocking me slightly.

It only took a few moments for the sobs to subside and I wiped at my face with a dirty palm. "My grandfather wants me to go to Rome."

"I can’t," he said, letting his hand rest on my shoulder. "You’re young and I know you are happy here, but you’re a Roman citizen, Makabi. I can’t take you in."

"I’m just a kid," I cried, and then fell again into sobs so fierce that as Yosef sat there and rubbed my back, I fell asleep.

I woke the next morning lying on the floor next to Yehuda. Although the twins were mirror images of each other, I’d learned to recognize the subtle differences between them. Yeshua also carried a light but etched scar on his right temple, the product of an accident when he was very young. Read More ....Mark’s Story 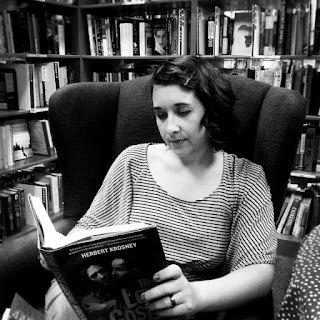 Angella Graff was born and raised in the desert city of Tucson, Arizona. She married and became a mother very young, and after getting started with her family, began her University studies where she found her passion for creative writing, history and theology.

She now resides in Tucson with her husband Joshua, three children, Christian, Isabella and Adia, and their three cats, Archive (Ivy), Lasciel and Fix. She prefers to spend her days writing, gardening, and reading non-fiction theology theory books. Angella is also an avid, if not fanatic fan of Doctor Who and BBC Sherlock, which tend to dominate her dry, sarcastic humor, a lot of which is apparent in her writing.

Currently Angella is working on an Urban Fantasy series called The Judas Curse, involving extensive research into Mythos, Christianity and history. The first book of The Judas Curse, The Awakening, was released November 2012.

To learn more about the author and her work visit our author showcase page.


Event pages on Facebook and Goodreads have also been created so you can be sure to keep up to date with all the fun events. You may even catch Angella chatting with her fans. Check out Angella Graff’s official tour page for her full schedule and the entry form for the giveaway.
Happy Ranting and Raving!!!


Sunday 5th May  - Sarka-Jonae from Between Boyfriends (guest post)

﻿
a Rafflecopter giveaway
Posted by Crystal Rants at 3:01 AM