Survive and Conquer by Andrew Grey 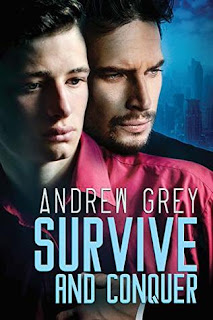 Newton DeSantis was on the ground when the towers collapsed on 9/11. Though he still carries the scars on his body and his heart, he’s determined to ease some of the world’s suffering. Now a social worker and father to two children with special needs, he’s doing his best. But when his son’s health takes a drastic turn, Newton knows he can’t do it alone.

Family law attorney Chase Matthews is a rising star, and he’s in high demand. Still, Newton is very persuasive, and Chase takes his case pro bono. Everything about the other man appeals to Chase, but he’s determined to keep the relationship professional—even though, after meeting Newton’s kids, he wants to be a part of their lives.

Chase’s job doesn’t always allow him to pick his clients, though, and a case that could make him partner will put him on the opposite side of the courtroom from Newton—along with everything he believes in and the future they could build together.