Purchase Links: Amazon
Book Description: Alexandria has no choice. She must flee to the last place she wants to. Straight into the arms of a vampire she was determined to forget.

Salvator finds this a clever fix to obtaining the one woman he has always desired, Alexandria.

Together, they must find a way to evade her powerful enemy, Salvator's brother Luciano. On the run, they struggle to understand one another. Denied passion ignites. Blood is spilled. Within the heart of Vesuvius, anything is possible.

When ancient Italy pulls them back in time, dark secrets are revealed.

All can be conquered. But will it be? Can wrongs be made right? History is the locked door. Forgiveness is the key. Time will tell if ancient love can once again flourish.

Short Excerpt: Salvator smiled, white teeth gleaming through the darkness, midnight hair brushing his shoulders. "Now that is where you are wrong." When he stood, she instinctually shifted back against the headboard. "Clothing never suited you."

Her nudity
suddenly felt underused and sumptuous. The thin sheet and velvet blanket like a caress of pure perfection. As he slowly approached her thighs spread, welcoming. She slammed them shut and refused to scowl.

Salvator dripped seduction. He walked it, breathed it, spoke it.

"Shhh," he whispered. His finger trailed up the bedspread, skimmed along her thigh, hip, waist, until it left and returned to his side. "I will not seduce you…yet."

For a split second, Alex almost said, "Why not?" She caught her tongue. Ancient vampires were very good at what they did and Salvator ranked amongst one of the eldest. But she had grown. After all, she had been made eight hundred years ago. Though not one of the more powerful of her breed she'd paid attention and learned.

"I demand respect. I'm old enough to request such," she said. His olive-skinned hand clenched and pulled tighter against his side. She met him eye to eye, did not shy away from his abnormally pale bluish-gray gaze as she had in the past. He was to fear, respect and worship. Tall and broad shouldered, inherently smooth, he owned a room when he entered it.

He had owned her once, almost.

With a flick of his wrist, she felt the weight of clothing comfort her skin. Salvator hadn't lent glamour to it to purposely arouse her. He had honored the way of the vampires. In many ways she was shocked he had lent his aide to her at all. But he hadn't really. He had lent it to Gabriel, for purposes of his own. Though she would like to say Salvator was different than most vampires, he wasn't. There had to be a method to his madness.

Alex swung her legs over the edge of the bed and stood. This put the top of her head at his shoulders. "You could have dressed me in something more acceptable."

Shifting slightly, he cornered her between the bed and night table. "Consider yourself lucky you are dressed at all."

Lightning fast, his hands lay on both sides of her waist. His imposing frame was far too close, beautifully proportioned face bent. Long, thick black lashes framed his icy eyes.

"You sought my protection. Your insolence incites me." His hands squeezed. "To not grant you the respect you feel due you."

Did he still think her the quivering novice? She would not pay him an unwarranted price for his shelter. She'd not be his whore.

With all of her power, she shot one hand forward. He fell back a few inches. Alex waited calmly for the expected counterattack, for it would be swift without doubt. Instead of the wallop she deserved for attacking an elder she witnessed an oddity.

He smiled and said, "You've changed, uccellino. You are no longer a cowering beginner."

I love anything that has to do with vampires, sexy ones especially. Salvatore completely took my heart away. His love for Alexandria was breath taking and beautiful. I cant believe that I am saying this but I like Alexandria even though I think Salvatore should belong to me lol, but I could not find anything out of place with her character.  She is smart, loveable and just made the romance between her and Salvatore believable. This short story was brilliant because I got to connect with the characters in such a short time frame but I feel like I have been hanging out with them for a while. You are drawn into the story for its action, romance and of course you all know I need to go there again, sexy dangerous vampires.

Speaking of vampires, I just told my boyfriend to go out into the night down the dark alley to get bit by a vampire so that he can come back and bit me.  LMAO, you all should see his face……. Anywhoo, Heart of Vesuvius was a good read for several reasons. One, the authors writing style just kept the story flowing with ease. Two, it was a short story that just quench your thirst as soon as you sucked your teeth into it. Three, the romance was captivating, and four this was a big whopping reason for me, it’s about vampires. I need not to say more.

This was my first time reading a book written by Sky Purington, and I can guarantee it won’t be my last. Actually I am going to go back and read book 1 in the Forsaken Brethren Series.

I rated this book 4 out 5 purple Rant Hearts and I would recommend this book to vampire lovers across the globe. 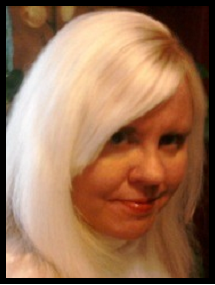 Sky is the best-selling author of seven novels and several novellas. A New Englander born and bred, Sky was raised hearing stories of folklore, myth and legend. When combined with a love for nature, romance and time-travel, elements from the stories of her youth found release in her books.