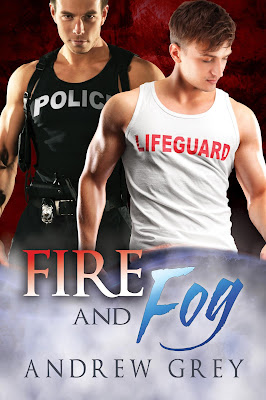 Carlisle police officer Dwayne knows what Robin is doing the moment he lays eyes on the young man at Bronco’s club. But he doesn’t know that, like him, Robin also comes from a family who cast him out for being gay, or that he’s still lugging around the pain of that rejection. Robin leaves the club, and soon after Dwayne decides to as well—and is close by when things between Robin and his client turn violent.
When Dwayne finds out Robin is the victim of a scam that lost him his apartment, he can’t leave Robin to fend for himself on the streets. Despite Dwayne’s offer of help and even opening up his home, it’s hard for Robin to trust anything good. The friendship between them grows, and just as the two men start warming up to each other, Robin’s sister passes away, naming Robin to care for her son. Worse yet, their pasts creep back in to tear down the family and sense of belonging both of them long for.
Will their fledgling romance dissipate like fog in the sun before it has a chance to burn bright?

The capitol complex shone like a beacon, and Dwayne headed in that direction. Light meant safety, and this wasn’t a familiar neighborhood for him. There were others on the street, some couples walking close together. It was a great summer night to be outside. He walked a block or so, the beat from the club still pulsing through the ground at his feet.
“That’s not what—” a voice called. Dwayne listened for more. “No!” Fear spiked the air, and Dwayne was on alert, listening for where the sound had come from. He heard the rip of fabric between passing cars. “I said no!” The voice got louder, and Dwayne picked up his pace.
“I paid and you’re going to put out.”
Dwayne reached the alley entrance, stopped, and peered around the corner. A huge guy stood near a dingy brick wall. It was hard to see, but Dwayne could just make out another man pressed to the brick, the side of his face against the unyielding wall.
“That’s enough.”
“Get out of here. He and I have business,” the guy growled.
Dwayne stepped closer, ready for action. “You need to leave now!” He used his cop voice and saw the guy flinch. He might be big, but as Dwayne got a closer look, he saw the beer gut and flabby arms. This guy probably was used to throwing his weight around, but there really wasn’t much to him.
“Fuck off. I paid and I’m getting my money’s worth.”
“So you’re admitting to soliciting someone for sex… to a police officer. That makes my job very easy.” Dwayne pulled out his phone, and the lug took a step back and then ran the other way. Well, he sort of waddled fast, but the response was the one Dwayne wanted. He made sure the guy was gone and then helped the smaller man, who had crumpled to the alley floor.
“It’s all right. He’s gone.” Dwayne lifted the guy, who wasn’t verbally responding, off the concrete and carried him out to where there was more light. As soon as the glow from the street shone on golden hair, Dwayne knew who it was.
“Robin.” He caressed his cheek, and Robin groaned. Dwayne set him down and waited for the shock to wear off. “You want to tell me what happened?”
Robin managed to stand and rubbed the side of his face, then pulled the remains of his tattered shirt together. “No.”
“I’ve got a pretty good idea already.” Dwayne half expected Robin to try to bolt, but instead he just shook, and Dwayne held him upright. “Let me guess. For all the bravado, this was the first time you’ve done anything like this.”
“Shit… I can take care of myself.” The defiance was back, and Dwayne was glad Robin was able to manage it, even if he knew it was all just a front.
“Like you did back there.” He wasn’t in the mood for nice at the moment. “I’m not dumb. I know what you were doing and what nearly happened. So you can tell me about it, or I can call some friends of mine and you can talk to them about prostitution.”
“You’re a real jerk, you know that?” Robin’s stomach rumbled loudly, and he put his hands over it as though it ached.
“No. The jerk was the guy in the alley. I’m the man who saved your ass from God knows what.” Dwayne saw some of the fire go out of Robin’s eyes. “And you’re acting defensive to the guy who saved your ass, quite literally, from what was about to happen. So I think you can open up and tell me what’s really going on.”
Robin quivered once again. “I was about to leave the club because I wasn’t going to get anything in there. Too many people watching. That guy approached me and asked if I was up for a little fun. We left and he paid me fifty bucks. I figured I could blow him as long as I was careful, but it turned out he wanted more than that, and I wasn’t going to give it to him, so he was planning to take what he wanted anyway.” Robin sniffed. “He stank and shuffled all the time, like he might have been sick or something, but fifty bucks will feed me for like two weeks. And….”
“How long has it been since you ate?” Dwayne asked.
“I don’t know. Probably yesterday.” Robin suddenly seemed even smaller and weaker. Dwayne knew he should be a little ashamed, but Robin’s vulnerability seemed to make him more attractive.
“Come on, then.” Dwayne guided Robin down the block to the corner. “There’s a diner just that way. We can get something to eat and then you can tell me what’s really going on.”

Andrew grew up in western Michigan with a father who loved to tell stories and a mother who loved to read them. Since then he has lived throughout the country and traveled throughout the world. He has a master’s degree from the University of Wisconsin-Milwaukee and works in information systems for a large corporation.
Andrew’s hobbies include collecting antiques, gardening, and leaving his dirty dishes anywhere but in the sink (particularly when writing)  He considers himself blessed with an accepting family, fantastic friends, and the world’s most supportive and loving partner. Andrew currently lives in beautiful, historic Carlisle, Pennsylvania.
Author Links
Amazon Author Page
Barnes and Noble Page
Dreamspinner Press
Facebook
Facebook Group All the Way with Andrew Grey
Goodreads
Twitter @andrewgreybooks
Website
Book Links
Amazon
Barnes and Noble
Dreamspinner Press