Review: As Cold As Thorns by Isis Sousa 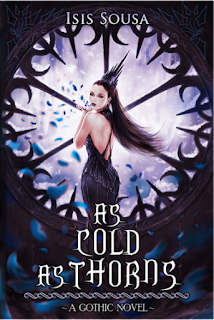 Title: As Cold As Thorns

Blurb/Synopsis: When lust and vanity consume a humble young soul, nothing is left but a faint flame in the darkness of the void.

The solace and contentment of Henrique’s simple life as a small-town tailor’s apprentice vanish when his ambitions turn him overnight into one of the most powerful and influential personalities in early-1800s Europe. His quick ascension to the upper echelons of the leading Iberian Empire reveals a man torn between the pure heart he once was, and the grim shade of what he has now become: a spirit obsessed with expensive material possessions and the urge to acquire the unattainable.

Henrique succumbs to the ever-growing desires and beguiling passions tormenting his mind, causing a rupture between reason and a desolate world of ice and snow where pain is the key to salvation. Will he survive his encounter with the colossal emptiness and find the righteous path to lead him out of his agony?

Come and indulge yourself in this startling tale of coldness and wonder.

FTC Disclosure:  I received a final and/or advanced reader copy of this book from RBTL Book Promotions and the Author/Publisher with the hope that I will leave my Unbiased Opinion. I was not required to leave a review, positive or otherwise, and my opinions are just that... My Opinions. I am posting this in accordance with the Federal Trade Commission's 16 CFR, Part 255: "Guides Concerning the Use of Endorsements and Testimonials in Advertising".

The man took off his underwear and slipped into the water, which felt good on his skin. It was slightly too warm, perfect for relaxing his weary, lean muscles. He supported his head against the end of the bathtub, closed his eyes, took a deep breath and then exhaled in a fatigued fashion. A train of memories took over his mind. 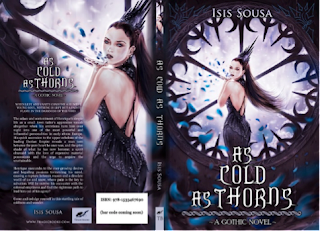 After days of exhausting traveling by carriage, Henrique was in his most light-hearted spirit when he crossed the Spanish Royal Garden for the first time. The carriage was steady for the road was smooth. From the window he could see the vastness of carefully designed flowerbeds, a myriad of color combinations like an impressionistic palette, all tinting the abundant green of the trees and bushes and the carpets of grass. It was midday in late summer; the exotic birds spread throughout the grounds amused him. The fountains and pools added as much embellishment to the place as did the fruits on the trees, especially the oranges, which brought vibrancy to the eyes of visitors.

Henrique’s hands were cold and his breathing was sometimes too fast, sometimes contained. He tried to exhale and inhale with moderation, but it always failed. His heart knocked inside his chest, telling him that it was very alive. His shoulders were hard as rock with the tension that had consumed him over the past days. He didn’t know what to expect of his new position, except that his responsibility would now be much greater. He was already famous for such a young age and highly recommended for the costumes he had designed for the Portuguese Crown, before it was taken under Spain’s Regency, forming the Kingdom of Iberia. Rumours spread that he was the best tailor in Europe. Now Henrique’s outstanding services would be all for King Carlos Juan Filipe and his family.

They stopped and a servant opened the carriage door. Henrique climbed down and another servant, who awaited him at the bottom of the large stairs, took him through the main opulent entrance and inside the Great Hall. There sat a family: a stocky man of strong features, a woman of benevolent countenance, two inquisitive young men and a… curious adolescent girl, who looked more like a boy divested of any grace. She stood literally out of the picture, as if she didn’t belong with the others. There was something silly about her spirit, as opposed to the ineffable air that surrounded the other royals.

She was the first to smile when Henrique approached the group, accompanied by the servant. Her smile changed everything; it made her look like the most gracious being of all. Henrique smiled back and at that moment that little act of kindness made him feel as if he was home. The others soon cracked a smile too and received him festively.

Henrique opened his eyes abruptly, his mouth and nose filling with water. He gasped for air. He coughed and coughed until he cleared his throat, looked around him and acknowledged the real world. He took a hand mirror from a drawer in the stand by his side and stared at his features under the candlelight. His pupils shrank at the reflection of the light. He had chronic dark circles under his weary eyes and his hair had turned gray where, just five years ago when he had arrived at the Royal Palace, his heart had been as light as a feather and his hair black as a raven.

My Rant: As Cold as Thorns was beautifully, twisted. This book revels in the longing of love, lust and companionship. There is a battle between good and evil in one's soul especially when the person can't be with the one that they love. Enrique’s story touch me on so many levels, not only was this character very talented but he was very passionate and fierce at his creations. I found him to be very vulnerable, voracious and dark. He became one of my very favorite’s characters. The author exposed him in various ways that gave me chills down my spine. Her imagination helps you to fall in love with the beautiful things in life like a rose but shows you how that same rose beautiful thorns can prick with a venom that can leave you dead inside, exhausted, and drained from the emotional turmoil. Watching this character's off-kilter behavior was almost is frightening because you can relate to having the same out-of-body experience where you watching a story through two different worlds in the eyes of the same individual and you realize what you want isn't as easy as it seems.

I rated As Cold As Thorns 4 out of 5  Purple Rant Hearts and would recommend this story to anyone that loves a story that pricks at the lining of your emotions. 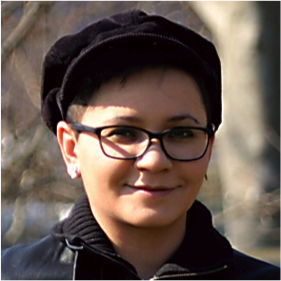 I am an artist; illustrator and graphic designer who writes on my free time. But with all the imagination I have running lose, there came some stories… And there came some books!

I am born and grown up in Brazil, however I live in Mid-Norway with my beloved husband, in a tiny valley surrounded by mountains and with very few neighbours.

When I’m not doing artwork and illustration for clients, I’m doing woodcarving, painting ornaments, painting artworks for myself, and so on. Love Arts, History and Metal.