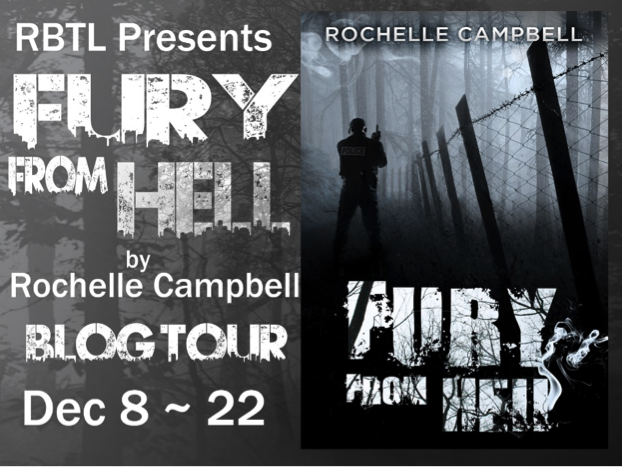 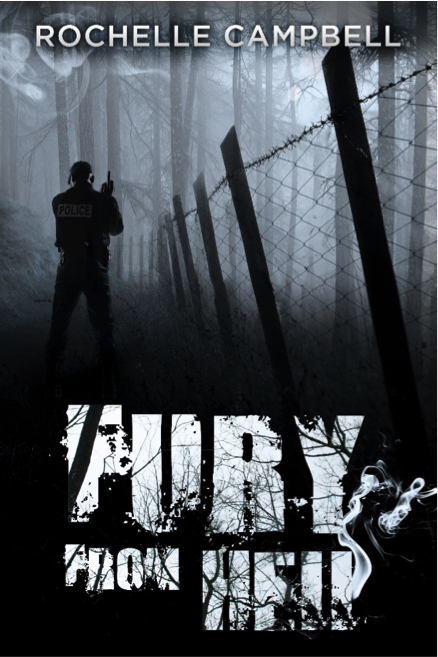 Blurb/Synopsis: Fury From Hell is a paranormal thriller about good vs. evil. Here, the good is in the form of Detective Jennifer Holden, a homicide cop that is haunted by her own personal demons of a murder she committed when she was just a teenager. The trauma she suffered at the hands of social agency after agency hardened Jennifer into a staunch atheist making her gun and her bank account the only things she truly believes in.

We meet Detective Holden, shortly before she begins working on her first solo murder case. The victim is Kyma Barnes who was brutally raped and killed. As Kyma’s soul leaves her body, a demon being called by a coven of dark witches at nearby Prospect Park, is drawn to the dying woman by her death throes. Fury Abatu offers to avenge Kyma’s death. The price? The dying woman’s soul. Kyma gives it gladly to ensure the man who killed her pays dearly.

At the crime scene, Jennifer becomes possessed by Fury Abatu. Hosts usually die a violent death within weeks of the initial possession. Detective Holden does not know she is possessed…

With butterflies stomping around in her belly, Jennifer reached the crime scene in under twelve minutes. The brisk walk made her perspire even though it was a cool night. There were several officers milling about. Jennifer walked under the police barricade and headed towards the back of the site where the bulk of cops congregated.

She took a deep breath and said to the nearest officer, “I’m Detective Holden and I’ve been assigned this case. Who was first on scene? And what do you know?”

The false bravado seemed to ring true to the officers in the vicinity and they jerked to attention mumbling the name Saks.

Holden was feeling pretty good until they turned, looked around and saw her.

“Oh…Holy Holden. It’s just you,” said Saks, a rookie barely a year out of cadet school.

“I was first on-scene. I heard a blood-curdling scream and came running down the block — I was on Hoyt but closer to Schermerhorn. By the time I got here the perp was gone and the girl — dead and totally jacked up. I mean unrecognizable. Her ID says she’s Kyma Barnes and she was a looker. Perp played with her for quite a while before he did her in. She’s a bloody mess!”

While he was speaking, Jennifer drifted closer to the body. Just as he finished, she caught the first glimpse of the victim. Jennifer’s hand immediately went to her mouth. Her stomach heaved.

“Six years on the job and she’s like a damned rookie. Watch it boys, the Detective in Charge is gonna to blow,” said Saks.

Shaking her head from side to side, Jennifer was oblivious to the comment as she tried to get away from the body so she wouldn’t defile the remains any further. Images flickered shutter-like in front of her eyes. Her uncle ripping her orange coat with the pumpkin buttons. Him, above with her knees spread wide. Blinking it all back but losing badly, Jennifer tried to swerve around the body and tripped on the blue tarp flapping in the slight breeze. She fell just above the victim’s head bashing the side of her own face. Jennifer was near enough that the victim’s bloody hand was splattered with vomit.

Behind her she could hear the sound of laughter, back slapping and a loud guffaw. Jennifer blinked and attempted to wipe the filth out of her eyes but an impossible image arrested her gaze — two eyes dripping with blood ensconced in a reptilian female-looking face.

The hallucination was accompanied by a feeling of prickly heat all over her body effectively chasing away her childhood demons. A loud shriek pierced her ears forcing Jennifer to cover them and shut her eyes. Then, just as suddenly, the sensation and sound stopped simultaneously. Jennifer cautiously opened her eyes. All she saw in front of her was the claw-like hand of her victim, Kyma Barnes.

Fully ensconced in the detective, the Fury pushed up the image of the little gun under the tarp. Jennifer moved her eyes and saw a denser blackness further under the tarp. She moved her hand and grasped the gun.

Jennifer’s mind accepted the command without question. Still partially underneath the tarp, Jennifer rolled over onto her knees with her back towards the still laughing cops and she pocketed the gun. The Fury wiped away all of her conscious mind’s recollection of doing so.

“You gonna stay under there all night, Holden? Even if you don’t have a life, the rest of us do!”

“Come on, Saks, give her a break. This is a rough one. The victim was beaten, raped and sodomized. I had to step away for a minute to get my stomach under control.”

Detective Yearwood bent down and held out a clean tissue to Jennifer. She took it gratefully and began wiping her face from a sitting position not trusting herself to stand just yet.

She pushed herself up and looked down at Kyma’s body and saw it as if for the first time in sharp detail. She went and stood by the victim’s feet and angled her head to take in what she saw. Grabbing her notebook she noted the angle of the victim’s legs — both still tented but the right one bent outward more than the left.

He’s probably a righty; he used his left knee to separate her legs and probably leaned on his left arm to balance.

She leaned over and sure enough found indentations in the hard-packed earth.

“Hey, did anybody take a cast of the indentations on her right side? We may get lucky and get a print out of that.”

“Holden, of course I did that. I’m not a rookie anymore,” Saks said in a pained voice.

Still observing, Holden looked at Kyma’s arms and face. Frozen on Barnes’ ravaged face Jennifer swore she saw satisfaction. She noted the observation down and continued her investigation. Squatting down near the bloodied hand over the cement, she inspected it. There was a lot of blood. Most of it probably the victim’s but Jennifer’s gut told her some of the perp’s blood was there, too. The prickly heat sensation ran up her spine and her eyes were drawn to the victim’s breasts. They looked mangled. Getting really close, Jennifer pulled out her penlight and directed it around the black and blue aureole.

“Saks, did you get a saliva sample from her left breast?”

“A what? Are you crazy? He was just twisting and pulling at her and don’t you see the knife marks all over her stomach?”

“Yeah, I do but you didn’t see the minute teeth marks on her breast. What? Are you afraid if you look at her breasts too long you’ll get a woody?”

The other cops smirked and a few soft jeers could be heard. Still very close to Jennifer, Yearwood said, “Good one, Holden. Get ‘em where it hurts.”

“Get over here and do your job, Saks. Maybe with real police work we can actually catch the perp you let get away,” Jennifer snapped off her light and stood up. She felt strong and secure in herself which was a generally unheard of feeling for her. Jennifer shook it off and looked down at Kyma Barnes’ remains.

“It is,” Yearwood responded.

“I’m going to get this bastard,” Jennifer said with a ferocity that made the hair on the back of Yearwood’s neck rise. He looked at her. Something about her was…off.

“Holden, you okay tonight? You seem…different.”

“Different? Different how? I’m not the one who likes reading the obituaries every damned day,” she said, her eyes slitting dangerously.

Yearwood took an imperceptible step back and decided to ignore the slight.

Appeased, Jennifer smiled. Yet, to Yearwood, her smile had a feral quality to it but he decided to keep that to himself. In a lightning fast move, Jennifer gripped his hand and shook it. It was a firm, manly, shake.

“Thanks, Yearwood. You don’t know how much I appreciate your observation.”

He gazed down into her eyes and noticed for the umpteenth time that her eyes had lighter brown flecks in them. He shoved down his feelings again but felt a slight surge of energy and hope. His hand was still wrapped around hers and he took a deep breath consciously releasing the soft hand that suddenly seemed so extraordinarily strong.

“Looks like you’ve got this case well underway, Holden. I’ll let you have at it.”

He stepped back trying to slow his racing heart and hide the growing excitement in his nether region. He nodded at her and the other officers and walked off briskly heading towards the wire fence.

Jennifer turned back to the scene and looked for more clues that would help her find the man who did this. While working, it came to her that she had finally found an overriding desire to do her job. Too stunned to deal with the revelation, she put it on the back burner to mull over later.

Deep inside Jennifer’s psyche, the Fury smiled at Jennifer’s realization. It was no revelation; it was merely the subtle prodding of the demon. The Fury hoped this host was ready for what more was to come.

My Rant: I really enjoyed this story and it came to me a such a time where I have not been able to read for a while due to other obligations. the plot was full of life with a spruce worth of action. The horror and suspense kept me at the edge of my toes.While reading I always had the notion of wondering the who, what , where and how. Being in the dark about a story is what intrigues me. The characters complemented the story well. You watch as they embark on a journey that leads them trouble in more ways than one. The authors writing style flowed with ease , it was easy to connect to the story and the characters. I devoured Fury from Hell and I am anticipating reading the next book in this series.

I rated this book 4 out of 5 Purple Rant Hearts and would recommend this to any reader that a good paranormal and horror story. 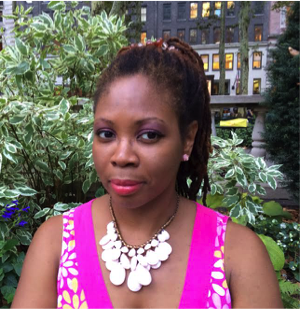 Writing has been a ‘thing’ I’ve done for well over 20 years. I started off in journalism and was bitten by the fiction bug in college. Through a series of fortunate events, I found an awesome Sci-Fi writing mentor – Jacqueline Lichtenberg. I studied with her for two years and began formulating plots that she approved of…mostly. Then, one day, I saw a plume of steam rising up from a manhole and the idea of a Fury coming out/through and Fury From Hell was born.

Posted by Crystal Rants at 7:40 AM