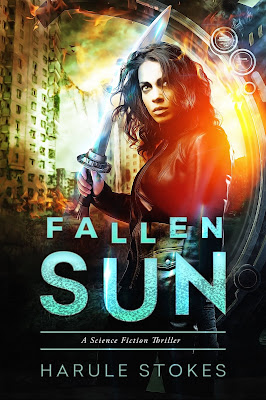 with No Series Name
Genre: Fantasy, Science Fiction Thriller
Publisher: One Wave Publishing
Release Date: May 15 2016
Edition/Format: 1st Edition/ Format ~ eBook &
Print
Blurb/Synopsis:
1st grade teacher turned super-soldier struggles to keep her
two sisters-in-arms safe during a bloody war. But, the process that created
these powerful living weapons is also turning some into psychopathic,
schizophrenic killers.
"You think being a genetically enhanced super-soldier
is hard? Trying being a 1st grade teacher."
That was a joke Jocelyn use to say to her teammate in
training camp. Today, many of those she befriended in camp are dead. Desperate to
keep her two sisters-in-arms alive, Jocelyn is willing to throw herself into
any challenge. Sadly, that's going to be harder than she thought, because
Ophelia is slowing going mad and Patricia is just a normal human who just
happens to be an incredible sniper... but still just normal.
How do you defeat foes that can turn the earth herself
against you?
How do you defeat foes that can dodge bullets?
How do you defeat foes who've already signed their own death
warrants?
With the war between the Northern Alliance and Keynosa
leaving both of their lands in ruins, Jocelyn's and her team are finally poised
to win and end the war for good. But, a new weapon, one that can instantly stop
even a super-soldier with a single shot, has hit the battlefield.
Together, Patricia, Jocelyn and Ophelia are sent on a
mission to destroy this new weapon and their enemy is willing to throw all they
have to stop them. These living war machines are in a race against two enemies,
but which will destroy them first? The lethal new weapon from Keynosa or their
own inner demons?

Growing up in Crown Heights, Brooklyn NY, Harule Stokes has seen his share of violence and drug abuse. But, armed with the knowledge of his elders, a faithful father and a strong spiritual base, Harule was able to make his way out of an assuredly dark existence and into a life of positive possibilities.

Today, married to his wonderful wife and supported by close friends, Harule is not only able to draw upon his past but to also add a new way of thinking that's both positive and uplifting. What you'll find in his work, is a wonderfully vibrant reflection of the beauty and tragedy of his youth.