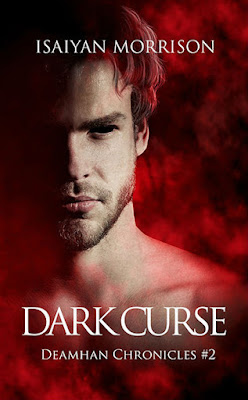 Blurb/Synopsis: The Deamhan world is in disarray. Freed from Limbo, Lucius, the once feared and Ancient Lugat, goes on a killing spree to wipe out any remaining traitors in the city of Minneapolis. Meanwhile The Brotherhood's return along with the growing population of vampires riles up the remaining Deamhan who choose to stay behind rather than abandon the city.

The body count continues to pile up forcing both humans and Deamhan to pick a side. Either allow Lucius to free the Pure Ones, the first living Deamhan from Limbo, or take him out and cripple their already fragile presence in the city.

Veronica headed down the stairs and toward the foyer when Remy spoke up again. “I personally think you have every right to go after The Brotherhood for what they did to your mother. Everyone has the right to seek revenge. Ana decimates sanctuaries just for kicks. Lucius is hunting down Kei to the ends of the earth. Why can’t you have your fun?”
“That’s different.”
“No, not really.” His response left her stirring in her own thought.  He slowly descended down the stairs, catching up with her. “Killing is killing.”
“You have no idea what’s truly going on Remy,” Anastasia scoffed.
“Maybe not everything but I think I know what’s going on with you,” he replied. “You can’t fool me. You’re changing. You’re starting to actually care.” He continued on his barrage. “I have to admit, it’s a little awkward for me to watch the old blood thirsty Ana slipping away.”
“The only thing you care about is drama,” Anastasia replied quietly.
“True. But I hope you know that I really do miss the old Ana. I found her rather sexy.” He now stood only inches from her and grabbed her hand and placed it on his chest. The Anastasia he heard about in his past was nothing like the Anastasia now. Maniacal, heartless—all Deamhan feared her and her sire. She killed anyone in her path; Deamhan, humans, researchers, and vampires. She betrayed the Deamhan she sired and she never thought twice about killing anyone or anything.
“I wish I had a reputation like you.” He moved her hand toward his right breast then over to his left. They glazed over his pierced nipples and he finally moved her hand toward his belly button. He looked to Veronica who stood just a few feet from them. “You know, Veronica, none of those researchers who have ever followed me got it right. What they wrote in those crappy books about me...it made me look like a saint compared to Ana. What they wrote about your current housemate was absolute perfection.”
“Release me.”
He watched as Anastasia’s eyes grew dark and void. “I remembered my sire telling me about the scary Ramanga.” He placed his hand underneath her chin and pulled her in close. “He said if I ever crossed her to run the other way. He feared her as much as any other Deamhan did.” He moved in a little closer, expecting Anastasia to throw him off, possibly breaking a few of his bones in the process. Instead she didn’t resist. Remy scoured her thoughts and found them empty. He placed his lips over her mouth and at that moment, he took advantage.
He sucked, feeling her essence entering his mouth. He didn’t prefer the taste of a Deamhan to a human—it made him cringe and if he decided to drain her completely, he too would fall victim. However, Anastasia’s essence had a sweet yet tart taste that he found to be addictive. He felt her energy traveling through his system. It jolted him at full attention and he wanted more until the energy suddenly changed. It felt weak and heavy and its taste turned wretched.
As quickly as it began, she pushed him away with such force that Remy tumbled back, catching himself.
“What in the hell are you doing!” Anastasia screamed at him.
He wiped his mouth and laughed slightly. His body felt weak. “I just wanted a taste.” He watched her blurred movements as she reached for the wooden handle on the staircase, ripping it from the ledge. The sound of wood splintering only meant one thing and he tried to move, knowing his reaction time was less evolved than hers.
Taking the sharpest edge of the piece, she rammed it into his right breast. Pain shot through his entire body and he gasped, quickly falling to his knees. He gripped the wood, trying to yank it out but the more he pulled, the more the pain burned at his insides.
He never understood the significance of wood and how it played an important role to Deamhan. Sharp or dull, small or big, wood was like kryptonite; a thorn in the side of Deamhan. A small shard could weaken them, making them vulnerable. Taking one to the heart meant instant death while taking one to any other part of the body just felt annoying.
Now this was the Anastasia he knew; the Anastasia he missed. He loved playing with fire, playing with her emotions, and the thought of coming close to death became enough to excite him for another go around.
He smirked and he leaned over in pain. “Why the attitude?”

A veteran of the Armed Forces, Isaiyan Morrison was born and raised in Minneapolis. Her passions include writing, reading, and researching historical events. She also spends her time gardening, playing video games, and hanging out with her three cats and beloved Pitt bull.
She's the author of The Deamhan Chronicles, The Deamhan Tales, The Brotherhood Files and the novel, Old Farmer's Road.

The Brotherhood Files
Links Below Go To Amazon

These books explore the histories of certain characters in the Deamhan Universe.
(Can Be Ready At Any Point in the Series)

Posted by Crystal Rants at 5:30 AM