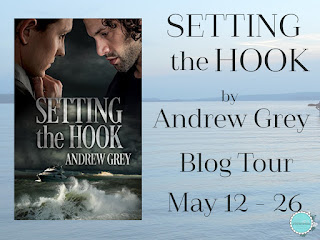 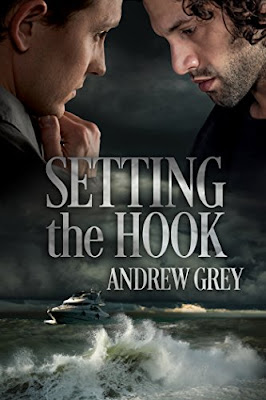 Mike started his Apalachicola charter fishing service as a way to care for his daughter and mother, putting their safety and security ahead of the needs of his own heart. Denying his attraction becomes harder with each of William’s visits.

William and Mike’s latest fishing excursion starts with a beautiful day, but a hurricane’s erratic course changes everything, stranding William. As the wind and rain rage outside, the passion the two men have been trying to resist for years crashes over them. In the storm’s wake, it leaves both men yearning to prolong what they have found. But real life pulls William back to his obligations. Can they find a way to reduce the distance between them and discover a place where their souls can meet? The journey will require rough sailing, but the bright future at the end might be worth the choppy seas.
FTC Disclaimer: I have not received any compensation for writing this post. I have no material connection to the brands, products, or services that I have mentioned. I am disclosing this in accordance with the Federal Trade Commission’s 16 CFR, Part 255: “Guides Concerning the Use of Endorsements and Testimonials in Advertising.

“The storm didn’t turn north. It’s continued moving west and is now near Orlando. If its winds start to reach the Gulf, the waves are going to build quickly. It seems like they’ve pretty much given up trying to predict this sucker and are winging it.”
Gordon turned toward the water. “Give it a few more hours and we’ll head in. There’s no sense taking any chances, and they’re going to have plenty of fish by then at this rate.”
“I agree.” If the storm headed their way, he and Gordon were going to need time to secure everything. “I’ve been listening to the weather every hour anyway.”
Mike returned to work, and Gordon helped William and Dean replace their nibbled-away bait. Mike moved them to a few more spots, each one closer to shore. After two hours, he checked the forecast once again. The storm was now expected to continue on its current path. “All right. This is our last stop. We’ll stay here for about fifteen minutes and then head in. The storm that was supposed to turn north in the Atlantic didn’t. It’s crossing Florida and will hit the Gulf in a few hours. We don’t want to be out here when it does.”
The attitude on the boat immediately changed. Mike started getting things together while Gordon helped the guys fish. They caught mostly red snapper and threw them back. William got a small reef shark, and Gordon clubbed it enough to stun it and got the hook out, letting it drop back into the water. That brought the trip to an end, and Mike pointed the bow toward land and opened up the throttle.
Gordon gathered up all the equipment and began putting it away. “Sorry, guys, about cutting things short.”
“It’s perfectly all right,” Dean said with a wide grin. “It’s better to be safe than sorry, and this was an amazing day. One I’m going to remember for a long time.” He sat down nearby, and William took the seat right behind him. Mike was hyperaware of him and knew William was watching him.
The wind picked up slightly as they went, though thankfully the water’s surface remained calm. But it wasn’t going to stay that way once the storm passed over Florida.
“Does anyone have a signal on their phone?” Mike asked.
“I’m checking,” William answered from behind him. “I have something, but not enough to really do any good. I could probably make a call if necessary, but….” William didn’t finish his thought as the power to the engine cut out.
“Fire!” Gordon yelled.
Mike switched the controls off immediately. Black smoke poured from the engine compartment vents, and Mike sprang to his feet, grabbed a fire extinguisher, and ushered Dean and William as far away as possible. Gordon got into position and tugged on the rope that would lift the engine cover, with Mike ready to douse any flames.