Excerpt : Jack on the Rocks by H.L. LeRoy 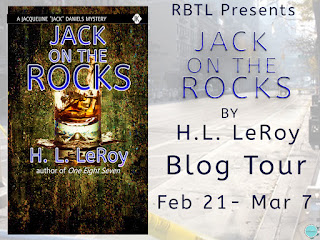 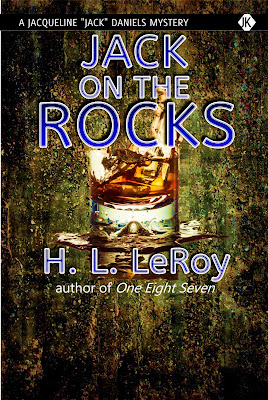 Title: Jack on the Rocks


Series: A LT. Jack Daniels Mystery (A loosely tied together series. But any of the stories can be read as a
standalone.)

Edition/Formats Available In: eBook/Kindle ONLY

Blurb/Synopsis: LIEUTENANT JACK DANIELS should have seen the avalanche of trouble headed her way but events had dulled her edge and crumbled her foundation of toughness. With the press and politicians all coming for her, Jack begins to question whether she is really a cold blooded murderer or simply losing her mind. Was it an officer involved shooting gone wrong? An honest mistake? Or, something much, much worse?

There's one thing for sure, it has turned the Chicago Police Department upside down, and Lieutenant Jack Daniels' life along with it.

Wicker Park had developed the reputation as a home to all things young, hip, and artsy-fartsy. I hadn't been in the neighborhood for quite a while and was surprised how upscale the area had actually become. The place was filled with restaurants, boutiques, bars, and nightclubs. Surrounded by condos, it looked like hipster heaven to me.
Becky's place sat smack in the middle on North Milwaukee Avenue. Herb and I parked in a visitor space next to the main entrance and headed in. The place looked nearly new and the cars in the garage seemed like they were all late model BMW's, or Audi's. Pretty high end for an eighteen-year-old, I thought. The mayor was probably paying the freight.
"Remember. No talking," Herb said.
Apartment 1A had a 'MANAGER' sign on it and Herb pushed the doorbell. A couple of moments later, it swung open revealing a skinny, ruddy-faced man dressed in a polo shirt and jeans with creases..
"Can I help you?"
Herb badged him. "We need you to open Rebecca Walsh's apartment."
"Just a minute."
He disappeared and returned with ring of keys.
"Upstairs," he said.
He led us to number 204.
"She got herself killed, huh?" he asked as he sorted through the keys.
Herb nodded.
"Drugs," he said as if he had solved the crime.
"Why do you say that?"
"Based on her visitors, an educated guess."
He turned the key and pushed open Becky's door. "Lock it when you leave," he said.
We pulled on nitrile gloves and stepped in.
Herb snorted, "Smells like weed."
It did.
Her phone sat on the end table. Leaning down, I pressed the playback button on the answering machine.
"Hi. This is Becky, and I can't take your call. Please leave a message."
She had a soft, pleasant voice with a smile you could hear.
There were no messages. Like everyone else she probably kept all her messages on her cell phone. Wherever it was.
A pretty fancy place. It had hardwood floors in the front room, a flat screen, but otherwise sparsely decorated. A glass and chrome coffee table, a black leather sofa.
She lived better than any eighteen-year-old I knew.
Stepping into the bedroom, I took a deep breath and blew air through my teeth. I could smell Becky's cologne as if she'd just been here. Nice clothes in the closet, some designer, some new, still with tags. I checked the pockets and found nothing. Same with the dresser, just underwear, socks, and a junk drawer. The normal stuff you'd find in a teenagers room.
An ashtray on the nightstand contained a half dozen roaches. Next to it was an amber med bottle with a pharmacy label for Xanax in Becky's mom's name.
I slid my hand between the mattress and box spring and felt a small book. Pink and about five by seven inches, it was embossed with a few colorful butterflies. A child's diary. It was not locked and I flipped through the pages and saw that she'd started the diary when she was a junior in high school. Still dotting her i's with hearts. Although Becky was very faithful and had written nearly every day, a lot the entries were illegible marks and drawings, lots of hearts, first names, and a few numbers all scratched in like doodles while she was talking on her phone.
I turned back to the last entry. The day she died . . . the day I killed her.
'Michael's coming over tonight, and I don't even like coke that much.'
I went back a few weeks to the first mention of Michael.
'Michael hurt me tonight and made me cry. 'Don't be a pussy,' he said and then he laughed, the asshole.'
I turned every page and took photos with my phone. Everything that was important to her, her personal life for two years.  When I finished, I stuck the diary back under the mattress.
"Jack." Herb was in the front room.
I headed in and he pointed at the coffee table. "That might explain what she was doing in a crack house."
On the smoked glass table top were the remnants of a half dozen coke lines.
So it seemed that some guy named Michael was with Becky the day I shot her. Doing lines of coke. Did she leave for the crack house with him? Did she go alone? Did he take her? Is he the one who shot at me?
Who is Michael? 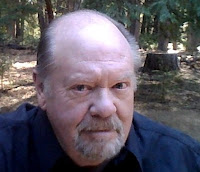 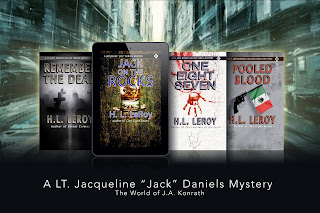 Other Works by H.L.
LeRoy
Kindle Worlds
(A LT. Jack Daniels Mystery)
One Eight Seven  (1)
Can Be Read As a Standalone

Remember the Dead (2)
Can Be Read As a Standalone

Pooled Blood (3)
Can Be Read As a Standalone

Jack on the Rocks (4)
Can Be Read As a Standalone