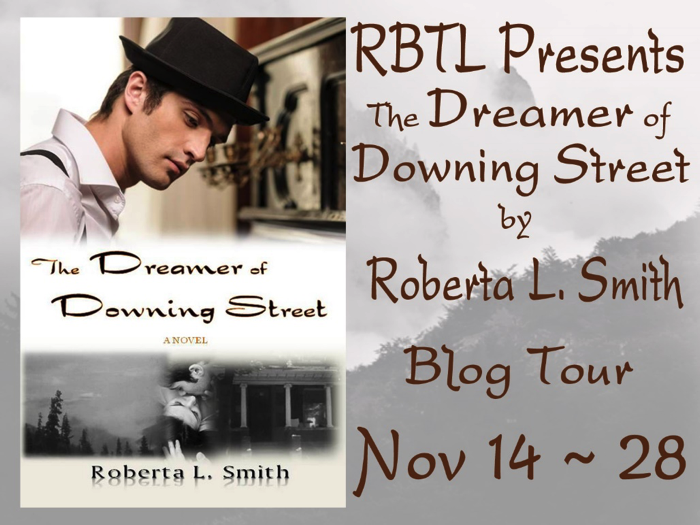 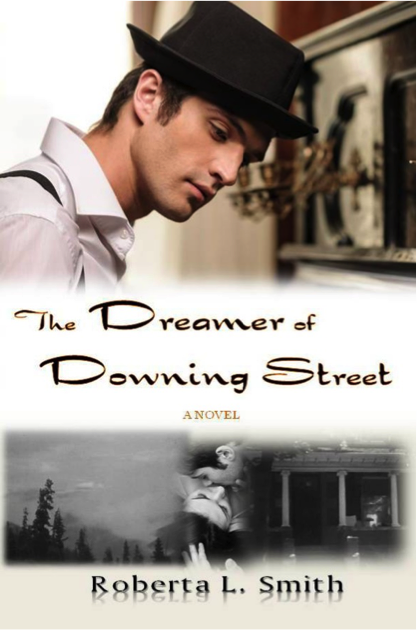 Title: The Dreamer of Downing Street

Blurb/Synopsis: In 1944 Denver, twenty-six year-old Franklin Powell is doing what he does best, helping clients with his psychic gift. Then his brother causes the past to come crashing into the present and a memory Frank has kept buried since the age of six surfaces. Now his life is in an uproar. He must prove that what he remembers is true or his mother may spend the rest of her life in prison. But even if he succeeds, it appears there is a powerful someone behind the scenes who could care less if she is innocent. Why? Because of a seething hatred for Frank. To make matters worse, the woman he loves needs his help with a serious problem of her own—a problem that could get him killed. Frank can’t let that stop him. He dives right in and while his psychic gift doesn’t seem to be doing him any favors, it’s a good thing that a couple of newly-acquired ghosts appear to be on his side.

I COULD FEEL Mother’s anxiety the moment she took my hand to pull me out of the canvas top touring car. I landed with a squishy sound as my boots hit the sloshy ground and I righted myself. The sight before me was forlorn to say the least: a couple of cabins―shacks really―a privy, shed and the hoist frame of a mine shaft no longer in use, all dusted with snow. It was spring, but just barely. And it was cold.

“You’ll be all right with the boy,” our driver called to my mother from his seat inside the car, arm outside the window, finger pointed. “Just remember what I told you. Call her Mrs. Tabor. She don’t like when people address her as Baby Doe. Show her respect. If she opens the door with a shotgun in her hand, just talk real nice. She guards the Matchless like a rabid dog and don’t trust people much. I ain’t sayin’ I blame her, just that’s how she be.”

Mother nodded and started toward one of the cabins, my hand in hers. I nearly cried out that she was hurting me, her grip was that tight. But I thought better of it. A tongue lashing would most likely result and that would be more painful. I stuck my free hand in the right-hand pocket of my coat and grabbed hold of one of the toy cars I kept there.

My heart beat rapidly. I was anxious, too. Not because of where we were or who we were about to meet. I was concerned for Mother because I’d never seen her in such a state. She paused for a moment and took several deep breaths as she stared at the small, one-room shack ahead of us. It cast a friendless feel out here on the hill amid the other wooden structures that were all part of the derelict mine. Constructed of planks that had weathered many winters, it wasn’t exactly ramshackle, but it was close. Not that I would have thought of that word at the time. I was six.

After a few more steps, my anxiety left me and the happiness I felt at being on a trip with Mother—just me, not my older brother Bobby nor my older sister Jane, just me—took hold. My siblings got most of Mother’s attention at home. With only me in tow, I would be foremost in her mind.

I looked at the front door of the cabin and “knowings” hopped into my head. Back then, that’s what I called the psychic thoughts that came to me. I knew we were about to meet an old woman who had been beautiful at one time. So beautiful that other people had been jealous. I knew that she was hated and that she lived alone.

I will just have a talk with that woman. So what if she’s peculiar, if they say she’s lost her marbles . . .

I glanced up at Mother. “Here, Mama,” I said, offering her a fistful of aggies and cat’s-eyes I kept stashed in my pocket along with the cars.

“What?” Her brows knit together as she looked at the contents of my hand.

“You said she lost her marbles. She can have these.”

Immediately my mother’s face turned to granite. I’d responded to something I thought she’d said aloud. “Why do you like to torment me?” There was a frantic undercurrent to her tone and the lines around her mouth deepened.

My heart seemed to freeze as it always did when I said something wrong and she glared at me with disapproval. La-la-la-laa. La. La . . . I sang in my head to block any more of her self-talk.

Mother took another step and the front door creaked open a few inches.

Mother stalled. The word “ostracized” came to me. My brain changed the word to “ostrich-size” which made me think the woman we were about to meet was big like an ostrich.

Mother’s voice cracked when she spoke. “This is my son, Franklin.”

The door opened farther and my jaw dropped. We were in the presence of the old woman I had seen last night amid one of the strangest experiences that had ever happened to me.

My Rant: The Dreamer of Downing street is such an amazing story that has all the element of love, mystery, paranormal and a historical theme and I really liked that. The plot was so busy, in a good way, I was sunk deep into this story and invested quite alot into the characters. I completely love and adored Frank and his willingness to use his gift to help others but not just that the way he made other fee about their gifts. What i also enjoyed in this story is that everyone has something going on a poor Frank is smacked right in the middle, but how he handles himself with the overload completely astonishes me. Oh by the way did I mention that he also has a love interest that he needs to save along with his mother that I feel kind of cast him to the side because of his powers. The story moves and build quickly but the author does not spare you any detail. Her writing vividly describes the environment, the emotions and the characters so easily that you can visualize them while you are reading. What an amazing beginning to what appears to be fulfilling series. I enjoyed the prequel so much that I am placing this on my 2014 favorites and I am using my one click addiction to download the next book in the series.

I gave this book 4 1/2 out of 5 purple rant heart and would recommend this story to anyone that enjoys a book the captures the elements of several genres. 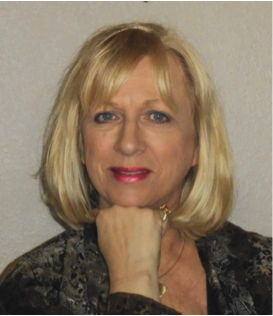 Roberta L. Smith was born and raised in Southern California. She is a graduate of the University of Redlands and lives in the High Desert with her husband. She is an active member of the High Desert Branch of the California Writers Club. Roberta had always been intrigued by the unexplained. Her favorite stories growing up involved ghosts and sometimes the macabre. As a child, she wrote a letter to Boris Karloff telling him she knew he didn’t mean to kill the little girl in “Frankenstein,” so it’s no surprise that the four novels she has published thus far are in the paranormal genre.

The Dreamer of Downing Street Prequel

The Secret of Lucianne Dove #1

One of Life’s Distorted Moments

Distorted: Five Imaginative Tales on the Dark Side

Stand Alones
The Year in a Live of a Civil War Soldier: The 1864 Diary of Frank Steinbaugh