Marata Eros is Giving Away Paperback Copies of A Terrible Love. 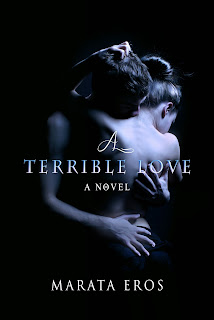 Jess Mackey is living a meticulously fabricated lie of necessity. She's left the secret tragedy of her past behind along with who she was and is forging ahead with a clean slate. But Jess soon discovers that passion can't be left behind—neither her own, nor that of the one man who sees who she really is…and whose unexpected presence may breach the peaceful life Jess has painstakingly created for herself.Devin Castile didn’t expect to meet a young woman who may be the missing puzzle piece to his existence…and who is also the victim of a heinous crime. Devin convinces himself that he can remain emotionally distant even while indulging his physical desire for her. But when Jess’s lies begin to crumble in the face of their undeniable attraction and the truth is revealed, one of them might pay with their life.(less)

Enter the Giveaway by Clicking Here

Posted by Crystal Rants at 8:24 PM

Email ThisBlogThis!Share to TwitterShare to FacebookShare to Pinterest
Labels: A Terrible Love, Marata Eros, Other Giveaways