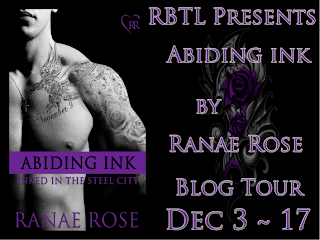 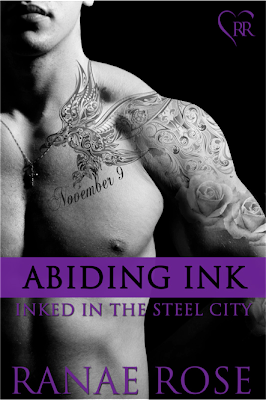 Blurb/Synopsis: Tyler DeHaven may look like a bad boy, but there’s got to be more to the tattoo artist who volunteers at the hospital during the holiday season. Inviting him to a work Christmas party seems innocent enough … at first. Problem is, he’s just as irresistible as he looks and falling fast is more than Mallory bargained for. After all, she’s reminded every day what a gamble love can be, and there’s no question that with him, the stakes are high.

It may be cold outside but Mallory Stephens is the hottest nurse Tyler has ever laid eyes on. To top it off, she also likes ink and wants him to be her holiday party date. He’s not going to say no, and when things get rocky, he’s not going to let their passion frost over, either.

Can a brand-new romance survive the chill as snow falls in the Steel City?

My Rant: I love hot men with tattoos better yet the ones that have a heart of gold. Abiding Ink completely blew me away and Tyler, Yes Tyler stole my heart and has claimed a piece for himself. This book was hot but what I enjoyed about it was that it was a romance story that hooks and keeps you. I really enjoyed the authors writing style and the romance story so much that I want to go back and re-read the story. I love this series and I am ashamed to say that there are other sexy beast out there and they just do not have to be vampires. LOL :-) Ok, I am not sure I want to take that back but I know for sure some of my book buddies would agree if they picked up this series.  The romance scenes were off the charts and definitely got my blood pumping. Ive been Inked and I just cant get enough.

FTC Disclosure:I received this book for free from the author, editor, publisher, or Promo Host. This is my honest opinion about this book and I did not receive any monetary compensation for writing this review nor was I obligated to write a positive one. 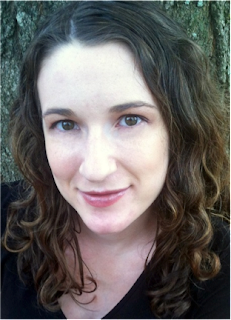 Ranae Rose is the author of over a dozen adult romances and counting. She calls the US East Coast home and resides there with her husband, child, German Shepherd dogs and overflowing bookshelves. Writing and reading are lifelong passions that consume most of her time, and she's always working on bringing her latest love story idea to life for readers.
Her latest release is Abiding Ink, Book 4 in her Inked in the Steel City Series.