Book Review: Give Me Hope by Zoey Derrick 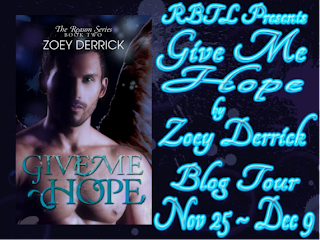 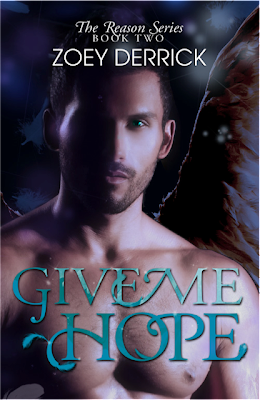 Blurb/Synopsis:  An Angel is he...

From the first moment he saw her, MIKAH BLAKE was seized by an inexplicable need to protect Vivienne Callahan, a fragile but fiery young woman who’s awakened a slumbering power within him. With his encouragement, Vivienne has begun to turn her life around, and things seem to be heading in the direction of a slow but certain happily-ever-after. But that happy ending is side tracked by a rising evil that is determined to destroy her.
When her dark past comes back to claim her, Mikah is caught in a whirlwind of events that lead him down a path he was born into but never understood. Until now.
Can Mikah save Vivienne?  Will his love be enough? Will he be able to control his angelic powers and use them to protect his newfound love?

A hum radiates quickly through my body as the sound of footsteps registers in my ears. This time it’s light, but doesn’t tickle. Someone that I know is coming?
After four more steps, a man steps into the doorway. My heart races for that brief second before recognition, and then the humming stops.
“Red. What are you doing here?”
“I came by to check on you.”
“How’d you know I was—…”
“You would think, after the last three years, you would know the answer to that question.”
I nod my head. “She’s in surgery.”
“I feel awful about this.”
I look to him, puzzled. “For?”
“I was there. Last night. Waiting for her to return home from work. If I’d gotten there sooner I—…”
“Stop. There was a cop who was killed in Riley’s quest to get to her. Do not think that it would have been any different with you had you arrived earlier.” I lean forward, resting my elbows on my knees, and look down at the floor. “The truth is that I don’t know when the cop was killed. Riley could have been in that building for hours before she got home. Or he could have managed to sneak his way in, leaving the cop for later. Something that surprised me most was the fact that her door was locked, but only the knob.” I wonder idly if Riley had left, met with his father outside of my building and then went back.
The buzz comes back, same as a moment ago, as I hear Red’s shoes hit the carpet.

My Rant: Love, Love, Love this series. Not only because I just adore the author, because this series really rocks. Give Me Hope was captivating and thrilling and you feel like you just cant get enough of Mikah. Mikah really imprints on you because he is so swoon worthy and Vivian makes it real. The two characters makes the series worth reading. But i have to admit I want Mikah all to myself.  The plot kept me on edge and the suspense was killing me although there is so much good being done in the story what would a story be like without some evil and I am a sucker for good over powers evil stories. Give Me Hope will take your breath away and i completely enjoyed the thrill of the story. This series is one of my favorite for 2013 and I am looking forward to the next installment. Zoey, hand down, I think you rock big time!

I rated this book 4 our of 5 Purple Rant Hearts and would recommend this book to anyone that loves Paranormal Romance.

The Reason Series:
Give Me Reason ( Book One)
Give Me Hope ( Book Two) 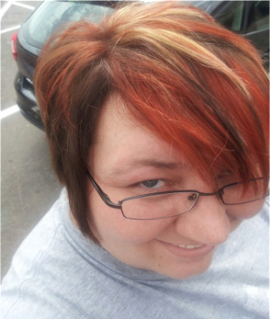 It is from Glendale, Arizona that Zoey Derrick, a mortgage underwriter by day and romance and erotica novelist by night, writes stories as hot as the desert sun itself. It is this passion that drips off of her work, bringing excitement to anyone who enjoys a good and sensual love story.
Not only does she aim to take her readers on an erotic dance that lasts the night, it allows her to empty her mind of stories we all wish were true.
Her stories are hopeful yet true to life, skillfully avoiding melodrama and the unrealistic, bringing her gripping Erotica only closer to the heart of those that dare dipping into it.
The intimacy of her fantasies that she shares with her readers is thrilling and encouraging, climactic yet full of suspense. She is a loving mistress, up for anything, of which any reader is doomed to return to again and again.