Cover Reveal and Giveaway: In the Blood & Will the Real Abi Saunders Please Stand Up?

Today we’re revealing not one, but two covers for upcoming books by Sara Hantz. In the Blood releases November 5 and Will the Real Abi Saunders Please Stand Up? releases May 6, 2014. 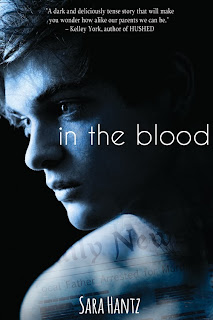 Title: In the Blood

Book Blurb: For seventeen years Jed Franklin’s life was normal. Then his father was charged with the abuse and murder of four young boys and normal became a nightmare.

His mom’s practically a walking zombie, he’s lost most of his friends, and the press camps out on his lawn. The only things that keep him sane are his little sis; his best friend and dream girl, Summer; and the alcohol he stashes in his room. But after Jed wakes up from a total blackout to discover a local kid has gone missing—a kid he was last seen talking to—he’s forced to face his greatest fear: that he could somehow be responsible.

In a life that’s spiraled out of control, Jed must decide if he chooses his own destiny with Summer by his side or if the violent urges that plagued his father are truly in the blood…

An adult who is sexually attracted to children.

Not that Benjamin Franklin.

Did you even know a bastard like that could lead a regular life?

With a wife and two children. A son and a daughter. No, nor did we. Until it was too late.

The numbing shock when he was arrested. The disbelief. The conviction that the police had gotten it wrong. Way wrong. Even in the face of damning evidence, we knew that the truth would come out. That the evidence got switched. That there was a cover up, or something.

Then the police found locks of hair belonging to each of those dead boys, so well hidden in the little trinket box my dad’s mom gave him on her deathbed.

Then we knew. Really knew.

And that’s when our lives changed. 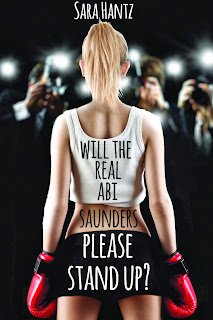 Title: Will the Real Abi Saunders Please Stand Up?

Book Blurb: Abi Saunders might be a kickboxing champion, but when it comes to being the center of attention, she’d rather take a roundhouse kick to the solar plexus any day. So when her trainer convinces her to audition to be the stunt double for hot teen starlet Tilly Watson, Abi is shocked—and a little freaked out—when she gets the job.

Being a stunt double is overwhelming, but once the wig and makeup are on, Abi feels like a different person. Tilly Watson, to be exact. And when Tilly’s gorgeous boyfriend, Jon, mistakes Abi for the real star, Abi's completely smitten. In fact, she’s so in love with her new life, it isn’t long before she doesn’t have time for her old one.

But when the cameras are turned off, will she discover running with the Hollywood A-list isn’t quite the glamorous existence she thought it was?

My cheeks are crimson and I want to die. I know he’s the director and has the right to holler, but doesn’t he understand that the louder he is the worse I am? We must have gone over this move fifty times and I still can’t get it. And I know, without even looking, the other guys have lost it with me. It’s easy for them but I’m a kick-boxer, not a freakin’ acrobat.

And now Zak’s saying something to one of the crew. Let’s all guess what it is: get rid of the silly girl. We couldn’t get anyone more incompetent if we tried. In fact a monkey could do better.

Well, he’s right, a monkey could do better. Then again, a monkey wouldn’t need to wear a harness that cuts badly into its thighs so it can fly across the room. We’re doing wire work, the one thing I was looking forward to. Ha. What a laugh that is.

At least we’re not filming yet. This is just the rehearsal or, as they say, ‘prepping’. We’re in one of the studios that’s full of equipment with pulleys and wires. I’ve no idea how it all works, except that it keeps me up in the air. I thought we’d be doing this outside but it seems they film wire work stuff indoors against a big screen, and then edit to make it look like it’s outside by dropping in a background. As Mom would say: “the wonders of modern science”.

What I’m doing is really basic stuff, nothing like the things they did on the Matrix. Which it wouldn’t be, obviously. I remember reading that those actors had months and months of kung fu training even though most of the stunts were done by stunt men.

Right. This is it. I’m going to really concentrate. I will not be beaten. I can do this. It’s not hard.

“Ready,” I call, for the first time feeling confident of success.

The technician holds up his thumb so I know we’re about to go. I take a deep breath, point my toes, bring my legs together and hold out my arms at a forty-five degree angle. So far, so good. I swallow hard as I begin to move.

I’ve done it. I’ve actually done it. I can do wirework. And even Zak’s sarcastic tone can’t spoil it.

A loud crash, sounding like someone slamming the door, gives me a start and I jerk backwards. My legs splay and I lose all control of my body, until suddenly I’m hanging upside down.

This so isn’t happening to me. My hair flops into my eyes and my arms dangle in mid-air. And let’s not even think about how shallow my breathing is.

After what seems like an eternity (which is probably only a few seconds) someone starts a slow handclap. And here’s me thinking it couldn’t get any worse.

I figure it’s Zak and wait for everyone to join in. Except they don’t.

The silence is deafening. Until…

“Look at that crazy bitch. You’re surely not expecting her to be my double.”

Tilly Winters in the flesh. And none too happy to see me! 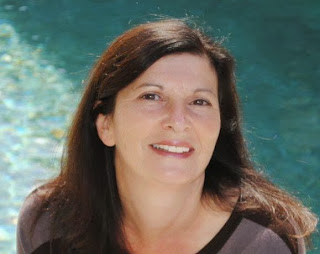 Sara Hantz originally comes from the UK and is one of four children, having three younger brothers. Although she was an avid reader from a very early age, she didn’t get the writing bug until much later in life, though English was always one of her stronger subjects. She’s an avid sun chaser and now lives on the beautiful Sunshine Coast in Australia (via 10 years in New Zealand). She writes young adult fiction and her debut book The Second Virginity of Suzy Green was published by Flux Books and made the prestigious list ‘New York Public Library Books for the Teen Age’. Sara has a PhD in Education and lectured for many years before deciding to devote more time to her writing and working in the family hospitality business. She has two grown-up children and w hen not writing, working or online with her friends, she spends more time than most people she knows watching TV - in fact if TV watching was an Olympic sport she'd win gold.

In celebration of the reveals, Sara is giving away a $50 Amazon giftcard! Use the rafflecopter below to enter.
a Rafflecopter giveaway

Email ThisBlogThis!Share to TwitterShare to FacebookShare to Pinterest
Labels: In the Blood, Organized by Entangled Teen, Other Giveaways, Will the Real Abi Saunders Please Stand Up? Sara Hantz, Young Adult Books