Dusk from the Not-So Dead Trilogy by Isaiyan Morrison

✦•°•✦ A THRILLING Free Read!!! ✦•°•✦
Salome by Isaiyan Morrison
Isaiyan Morrison is slowly
introducing us to some new characters (every two weeks) in her upcoming all new
paranormal/urban fantasy trilogy The Not-So Dead. The first full length title
in the trilogy will be releasing in Jan 2020
So if you’re ready to
meet these new characters and the world they live in
CONTINUE READING!!!

Our fourth character we
get to meet is Dusk 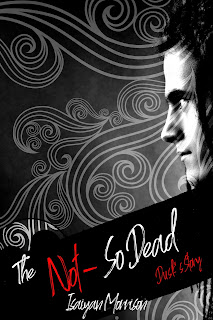 Characteristics: Phlegmatic: Phlegmatic or easy-going types come across as lower in energy than sanguine types, but have more of a level emotional balance than melancholic or sanguine people.

Moral: Caregiver: helps others before helping himself.

Pet Peeve: Readers who fold the corner of a page, rather than use a bookmark


Dusk is the patriarch of a nomadic family of wraiths.


His short story takes place in 1930s Chicago. After receiving a letter from an old friend Niamh, Dusk arrives in Chicago. Dusk doesn’t trust him but he can’t ignore the bond created when Niamh sired him nearly 400 years ago. Little does he know that Niamh is up to his old tricks again and has his eyes set on an amulet that no wraith has the business being part of. 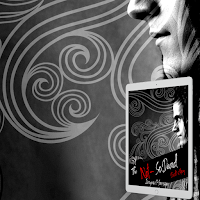 Below you
can find an Excerpt from The Not-So Dead (Book 1)
Available
January 21st, 2020
Amazon

Pookie licked Carter across the cheek, and he smiled slightly. “You knew
all along, didn’t you, girl?” He rubbed behind her ears.
She whined softly.
“She’ll call. I know she will.” He grabbed the machete and twirled it in
his hands. “She’ll come back for this, I hope.”
“No, she won’t,” said a voice from the corner of Carter’s apartment.
He jumped out of bed and instinctively raised the machete to defend
himself. At first, he thought Four had found him again, but it wasn’t him.
Instead, a tall pale man with brown dreadlocks stood in the corner of his room.
Wearing a long dark trench coat, he gazed at Carter like some kind of oddity.
Pookie didn’t bark this time. Instead, she cowered and slithered
underneath the bed sheets.
“If you’re going to
attack with that, make it quick.” Just like his facial expression, the man’s
voice was empty and flat.
“W-who are you?” Carter’s voice
broke while maintaining his threatening pose.
“I think you know.”
Suddenly, he recognized the stranger’s face. He’d seen him before, at
the club on the same night he had met Faye for the first time. He was also the
one who had driven the van into Four.
This man was like Faye, a wraith.
“You were the dude who left me on the side of the street!” Carter said
in a raised voice.
With his hands clasped together, the stranger stepped out of the corner.
“Now, y-you stay right there.” Carter lifted the machete higher. “I mean
it.”
His eyes had a haunted look. “Where did you get that?”
“You’re Faye’s… guardian or
something?”
“Where did you get that?” he repeated.
Carter swallowed hard as the man moved in closer. “I said, stay right
there.”
He stopped. “I’m Dusk.”
“Carter.”
Dusk’s eyes moved down to Carter’s feet and slowly back up to his face.
“You saved her.”
“Ugh, I wouldn’t call it saving. I just…” He nervously scratched the
back of his neck. “I was at the right place at the right time.”
“Hmmm. I guess you were.” He pointed at the machete. “I’m going to need
that.”
“This? Why?”
“Boy, this has nothing to do with you.”
“Faye said the same thing,” he replied. “And you know what I told her?
It does since Four came into my place, asking about her.”
“Four?”
“The guy who killed Maddy.” He watched as the white of Dusk’s eyes
turned a dark red.
“She told you?”
“Yeah, she told—”
“And he came here?”
Once he realized that saying another word only implicated him more than
he wanted, he caught himself and tried to backtrack. Faye did tell him that if
her family found out he knew the truth, they’d kill him. “Faye didn’t tell me
anything. I put two and two together.”
Dusk pointed at his laptop. “From what? Stupid conspiracy theory
websites?”
“Hey, they aren’t stupid! There’s some good stuff on those sites.”
Dusk held out his hand. “Give it to me.”
Carter gazed at the machete. “No,” he answered in a low and weak voice.
Dusk moved in a flash and vanished right before Carter’s eyes. He jumped
and spun around but didn’t see him. “What the hell was…”
Cold fingers wrapped around the back of his neck and they yanked him
back, forcing him to let go of the machete. It stabbed into the wooden floor.
“You’ve become a huge problem.” Dusk towered slightly over him while
Carter was perpendicular to the floor. His venetian red eyes fixed on him.
“Problem?” Carter choked. “Me? Oh, I’m no problem.”
His finger dug deep into Carter’s skin, causing a sharp pain that ran up
and down his spine.
“Wait, just wait!” Carter gagged.
“No human can know what we are and that we exist.”
“I haven’t told anyone.”
“Not yet.” He moved his hand to the front of Carter’s throat. “Faye is
fragile. She is still sensitive to human emotions, while I am not. If I kill
you, she will find out and I will lose her. I’ve already lost one member of my
family. I can’t lose another. So you see my dilemma, don’t you, Carter?” He
tightened his grip. “I want to kill you. I want to tear out your throat. It’d
be quick. Just a flick of my wrist.”

“Or…” Carter’s voice stifled as he spoke. “I can tell you what I found
out about the shard.”

WOW another great excerpt. I love meeting meeting these characters. Do you?

We Just Meet Dusk (the patriarch) this time.  He sounds like he's a loyal and caregiver character
that still has that air of respect.

Follow
this link http://bit.ly/38uXB8Z  to see a sneak peek into Dusk’s Short Story
on Isaiyan’s website where she will have a couple of chapters of Dusk’s Short
Story to read and if you like what you read you can download his short story for FREE (You read that correctly FREE) via a book funnel link. While You
Are There Checking out Dusk’s Story Grab Faye, Maddy, and Salome's Stories as well you know you want too. These characters
are amazing. This trilogy is sure be the urban fantasy of 2020.