Excerpt Post Hallie. A Tit for A Tat by @IsaiyanMorrison w/#GIVEAWAY 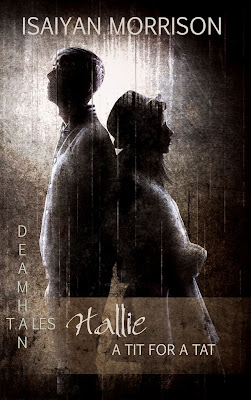 Title: Hallie. A Tit for A Tat

I, Hallie Mortenson, didn’t asked to be sired and thrown into a ditch. I never asked for my life to be turned upside down or to live in a world where sunlight is nothing more than a fading memory.

It’s against The Dictum to sire someone as young as me, but no Deamhan pays attention to those rules anymore. With the entire world against us, we’re more concerned with survival and avoiding the feeling of being suffocated rather than adapting to the drama we inherited.

I think I’m starting to learn that lesson…slowly. However, with threat looming around every corner, my sire’s return to the city is making things worse. He has a secret agenda; one which involves a very old and powerful Deamhan bent on revenge against his sire line, which includes me.

I keep telling myself that I’m not like them and that there has to be more to life than this.

I am a Deamhan and this is my story.

Excerpt #2 PG 13
Running back and forth from one place to another would make anyone tired, but not Deamhan. There’s something about running at tremendous speed, with the wind slapping against your face, which felt right. For me it felt like I was part of something bigger and better than who I was. It was liberating to be under the nighttime sky, especially when there were other Deamhan and a vampire running with you.
The city was dead quiet when we arrived at Dark Sepulcher, the vampire club of all vampire clubs. There were a few human walking about but not enough to notice or feel threatened. I was able to pick up on several different scents from the other side: food, old water, and vampires but nothing that resembled a Deamhan. Alexis knocked on the front door and soon heard slow footsteps approaching and the faint sound of someone grabbing onto the doorknob.
When the door opened, we stood face to face with a short, stocky bald black male. He was shirtless. A cigarette dangled in his mouth and his brown eyes looked us over. Alexis smiled at his appearance and he returned the gesture.
“Is everything ready?” she asked.
The vampire puffed out his chest and stepped aside. “Yeah. They’re all waiting inside.”
“They?” Still uncomfortable with going into what she called ‘the vampire’s den,’ Ji didn’t want to move an inch further. I calmed her by grabbing her hand.
“Lambert’s a friend to us,” I whispered.
“He’s your friend. Not mine.”
Alexis walked and I followed with Ji and Tank close behind me. When the vampire male slammed the door shut, Ji jumped and her eyes grew dark. I squeezed her hand and continued to tell her that everything was going to be fine. However, I had no idea what awaited us when we walked beyond the black drapes which separated the front area from the immense interior. There were too many vampires to count and their scents made my own senses go into overdrive. Then came the hunger pains. They felt like my stomach gnawed on itself. Suddenly these vampires began to look delicious.
Lambert sat at the bar with his right hand holding onto a cup of blood and his left hand resting on his leg. Everything I knew about him, I learned from Remy and the others. Before he was turned into a vampire, he’d lived a mercenary lifestyle which had made him the hard and sometimes unremorseful individual we knew today. He was a warrior and raided villages with his band of mercenaries. He was responsible for the deaths of countless families and he kept the head of his victims as trophies. He was also a born leader.
“Lambert!” Tank held his arms out as if the vampire would embrace him like a long, lost friend. “How have you been? Looks like you’ve been doing good for yourself!”
Lambert stood up from his stool. He wore a long white shirt that extended to his knees and dark pants. His dark hair was slicked back.
“You’re lucky that I have an interest in Hallie’s wellbeing.” He sipped from his cup. “If it wasn’t for her, you’d be in my dungeon right now.”
“Why do you and your vampire girlfriend always resort to torture threats?” Amused, Tank took one look at the horde of vampires under Lambert’s beck and call.
Alexis sauntered over to him. Lambert took notice and he gently placed a kiss on her cheek.
I searched the vampire crowd, hoping to see Remy or Enlai. Unable to find them, I asked Lambert if they’d been in Dark Sepulcher.
“I have my vampires looking for them now. When they find them, they’ll bring them here. Don’t worry.” He smiled.
“So, they’re still alive?” Ji asked.
“Yes. Surprisingly, Zila let them live.”
“Of course she did. They aren’t her targets,” Tank replied. “I am.”
“And what to do about that…” Lambert tapped his chin in thought. “Oh! I know.” He clapped his hands and the vampires in the club moved quick to surround us. Unaware of what was going on, I prepared myself for anything.
“So, that’s your plan?” Tank’s smile dissipated from his face. “To kill me? You know better than that Lambert.”

A veteran of the Armed Forces, Isaiyan Morrison was born and raised in Minneapolis.


Her passions include writing, reading, and researching historical events. She also spends her time gardening, playing video games, and hanging out with her three cats and beloved Pitt bull.
She's the author of The Deamhan Chronicles, The Deamhan Tales, The Brotherhood Files and the novel, Old Farmer's Road.