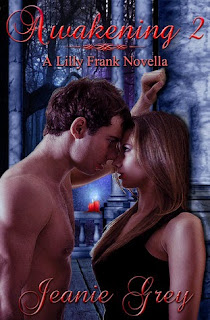 Book Blurb: A newly made vampire requires a certain amount of time to get used to her new body and heightened senses. But Torren's worried that if Lilly doesn't hurry up, she'll be dead before she ever gets the chance to adjust to life as a vampire.

Excerpt: In the odd moments when he slept, he was plagued by nightmares of finding her gone. Or worse, dead. One nightmare was particularly vivid and stayed in his brain for days. In it, he was cradling her in his arms.

She’s open and bleeding.
There’s blood everywhere. It’s all over him. So much blood. He doesn’t know how to stop it. He’s trying, but everywhere he touches opens a fresh wound and more blood comes pouring out of her body. She’s unconscious. She’s dying. He has to stop it. He’s practically bathed in her blood now. It’s all over his hands, his clothes, his face. He can taste it on his lips.

This is when he realizes that the scent of her blood isn’t triggering his hunger.

This is when he realizes that he is human again.

And he knows, with the unfounded certainty one finds in dreams, that it is her blood that has changed him.

He didn’t know what he’d do if she were gone. The thought alone was enough to send him into a panic. After all these years of waiting, of watching. After all he’d done for her. After all he’d done to gain her trust, the time he’d invested, the sacrifices he’d made to bring her to this point. She couldn’t leave him. She just couldn’t.

But that trust is misplaced, isn’t it? Maybe you shouldn’t have deceived her, whispered a voice inside him.

First, let me thank you, Crystal, for allowing me to do a guest post on your blog. I'm so honored and thrilled that you wanted to participate in the Awakening 2 release party! And now some thoughts on sex and vampires.

One of my readers for the first draft of Awakening remarked that vampirism is about repressed sexuality. My first reaction was, "Well maybe in other mythologies, but for Lilly it's about safety." She's felt unsafe ever since her mother's murder, and she's attracted to vampires and vampirism because it seems to her the epitome of safety. Consider these excerpts from the first book, Awakening:
“It’s okay,” he said. “You’re safe with me. You’ll always be safe with me."

In that moment, she did feel safe.[...] She knew he was strong, and she felt protected in his arms. He was a vampire. Nothing could hurt him; he couldn’t die. What could be safer?

She looked at Torren then. Thought of how strong he was, how he’d healed before her very eyes. He was indestructible.

“Make me a vampire,” she said, and held her breath.

My realization that vampirism was—for me, at least—about safety came when I started thinking about why I'd always wanted to be a vampire. Yes, there's something appealing about the intimacy and eroticism of putting your mouth on someone's neck and taking their life force into your body. And yes, most vampires are described as incredibly attractive, if not for their physical appearance then because they have some kind of sensual, magnetic presence. But there's a lot more to it than that.

In the majority of stories I've read with vampires in them, the vampires are wealthy and live lives of leisure and luxury. They don't have to work dull jobs in order to eat because they’re surrounded by food sources. They seem unaffected by extremes of heat and cold. They don't have to worry about "being in the wrong place at the wrong time" because most people can't hurt them.

Okay, yes, in most vampire stories they have to worry about other supernatural creatures, vampire hunters, sunlight, and wooden stakes. But they're generally smart and incredibly strong and, compared with a human woman, have very little to worry about.

All that said, I found myself thinking more about my friend's assertion that vampires are all about sex. Is there a connection between repressed sexuality and a need for safety? Why do people, and women in particular, repress their sexuality?

Perhaps in part because of cultural norms: A woman who engages in sexual activity with whomever she wishes runs the risk of being labeled a ‘whore’ or a ‘slut’ in our society. She might be accused of lacking proper self-esteem. Or, in some cases, might be told she's going to hell. It isn't safe for her to openly explore her sexuality because she might be ostracized. (To be fair, some of these norms also apply to men these days. However, I've never heard a man accused of low self-esteem because he had sex with a lot of people; instead I've heard him accused of lacking respect for his partners because monogamy is the norm in this society.)

It also might be an issue of trust: It takes a certain level of trust to be naked and vulnerable with another person. One needs to know that one's sexual partner will not attempt physical harm and will not say disparaging things about one's body. In other words, one must feel safe with a sexual partner.

Sexually transmitted diseases and the risk of unplanned pregnancy are also a concern. One doesn't want a few hours of pleasure to have unwanted, lifelong consequences.

A vampire, however, is no longer human, and therefore human norms no longer apply. Vampires are already ostracized because of their nature, and their sexual activity isn't going to make a difference one way or the other. A vampire can defend him/herself from physical attack and doesn't have to worry about STDs. Vampires also can't get pregnant (exception: Victor's daughter in Underworld).

What's my point? Well, maybe it's that vampirism is about safety even when it's about sexual repression. That the two are not mutually-exclusive. Maybe sexual repression isn't actually about sex so much as it's about wanting to know we are safe from both physical harm and from condemnation by our community members.

What do you think? Is vampirism more about sex than I've realized?

Visit the Link Below for details of the blog hop and giveaway.


Jeanie Grey is a feminist reader and writer of romance and erotica who lives in Portland, Oregon. Her short stories have been published on deadlyeverafter.com and thedarkerhalf.com. For more about her work and her views on writing romance and erotica, please visit her website at http://jeaniegrey.blogspot.com

You can also connect with her on Twitter (@jeaniegrey) or email her at writejeaniegrey@gmail.com