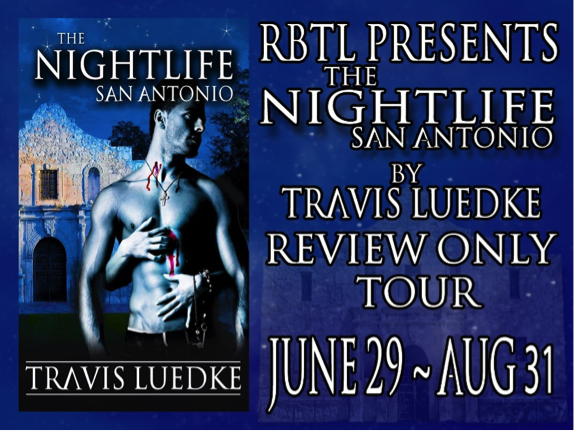 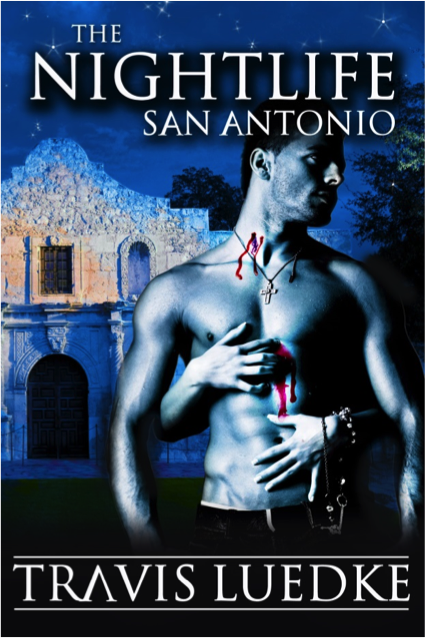 EMT on call, Adrian Faulkner resuscitates a beautiful woman after a Mexican mafia shootout. He can't explain why he picks her up in the hospital parking lot three days later and then ducks the San Antonio police and the Feds. Well, the hot sex might have something to do with it.

She needed to hide. With no memory of even her name, she didn't know from who. She only knew she wasn't safe.

Adrian soon learns she is much more than a damsel in distress, and he’s stuck with her. It isn't long before the past she cannot remember begins to catch up with them both…

THE NIGHTLIFE SAN ANTONIO is a non-stop thrill ride through the shadowy borderworld of mafia politics and vampires – and sex.

He wanted to throw her on the bed and bury his cock between her toned thighs. He wanted to see her eyes roll back in her head as he burned off all the insane need she inspired. His dick was so hard that it was slipping out the front of his boxer shorts all on its own, a heat-seeking missile intent on its new target.
But he didn’t want her like this, under these conditions. “You think I’m so hard up for sex that you can sell yourself to me for a place to crash?”
She stepped closer to him, holding his gaze with her freakish unblinking stare. “Don’t you want what I have to offer?” A slight smile quirked her lips, exposing those weird teeth.
His cock jerked free to stand at full attention, listening to her every word. His cock knew she would be warm, ready, probably a tight squeeze, and wanted to take full advantage of her offer.
He took in all of her. Dark tight nipples on small, perky breasts – barely a handful. Slim, tight belly, but just enough curve of hip and thigh to let you know she was indeed a woman. A fitness instructor’s physique. The damn bandages were ruining the whole effect.
She stepped in closer, within reach, and he could not control himself any more. His fingertips traced the milky white curve of her right breast, brushing lightly across her nipple, and up to the tape and bandage.
He grinned. She grinned back with too many teeth. He ripped the bandage off in one smooth pull.
“Pinche cabron!” She flinched, bearing her too long canine teeth in a small growl.
He noted her smooth, native Spanish, and thought to ask her about it later. For the immediate moment, Adrian saw what he expected to see, but it was still very hard to believe. Beneath the flecks of dried, old blood was a fully healed wound, not even a scar. He rubbed his fingers over the flesh, in awe. A bullet had torn a jagged crimson hole in that porcelain flesh three nights ago. Smooth, ivory skin filled his vision, now.
“Goddamn, you’re a fucking vampire.”
She eyed him suspiciously, her hands in the air, as if she would cover herself. Then that fiery spark came into her eyes, and she dropped her hands and lifted her chin in challenge.
He ripped off each of her bandages, none too gently. She gave no more than a slight hiss of noise in protest. Each of her wounds proved the same. Clean away the little crusty specks, and the woman was in top condition.
Adrian knelt, his face inches from her naked pussy, and jerked off the last bandage from her left thigh. It was difficult to keep his attention on her wound, when his cock kept telling him to check out the other parts, but he confirmed that her thigh was the same, fully healed like the rest of her.
He stood and towered over her. Her dark eyes tilted up to search his face for an answer. None of this made any sense whatsoever. He didn’t care. He wanted this crazy woman. Now. He couldn’t even wait for her to shower with antibiotic soap first.
“So this is the deal? I help you hide out from the law, and in exchange, I get …”
Without blinking, without pause, she spoke over the top of him. “Me. All of me. Whatever you want of me.”
Girl drove a hard bargain. But not as hard as his cock.
A sly smile curved his lips and he looked down the smooth, pale curves of her body. “Are you sure you’re up to it? I can be … demanding.”
She licked her lips and reached for his cock, protruding from the front of his boxer shorts. She enveloped him in a solid grip. “I can handle you.”

Aaron is hot, I had to keep fanning myself throughout the book. What makes his character more interesting is that he is an ex military man with military attitude. Not only do you get vampires but you also get a sexy military hero, yum yum, now who said a book couldn't taste as good.

Our mystery vampire has lost her memory but you don't get into who she is or where she comes from. But slowly her memories begin resurface. Everyone has an agenda and is set out to find her for their own gain. What a rush. I felt more like I was watching a movie than reading a book.

Travis did an awesome job of making a reader experience the night life. His writing style is exquisite. He spares no gory detail. You connect to his characters and the story. The villains are down right terrifying and the plot spirals out of control which makes me an emotional mess and I love it completely love how Travis ravishes my emotions.

Travis stories are addictive. You get such a rush when you read them. The Night Life series is one of my favorite paranormal/vampire series and San Antonio was just the icing on the cake. I look forward to reading more work by Travis.

Overall, I rated this book 5 out of 5 purple rant hearts. This book rocks and you have to have the guts to read such a story, so I am recommending this book and series to any one that loves vampires, smoking hot scenes and a plot that will know your socks off. Travis Luedke is a husband, father, and author of Urban Fantasy Thriller, Paranormal Romance, Contemporary Fantasy, Young Adult Fiction, and Sci-fi. He is currently catching a 3rd degree sunburn in San Antonio, Texas, and loving every minute of it.

As the author of the Nightlife Series novels, Travis lives very vicariously through his writings. He invites you to enjoy his macabre flights of fancy, but be warned: The Nightlife Series is violent, sexy, and occasionally violently sexy.

Posted by Crystal Rants at 6:54 AM