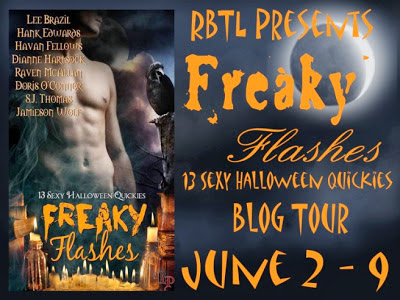 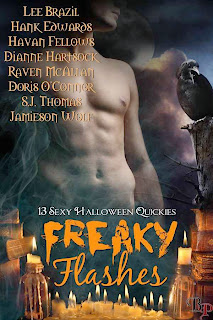 
A newcomer to town follows urban legend to the cemetery- is he a willing sacrifice, or an unfortunate dupe?


The Sum of His Parts by Hank Edwards


Scott Tallow awakens in a hospital, stitches holding him together. As a handsome doctor helps him heal, Scott comes to realize he's not quite himself.


Writing is a Socially Acceptable Form of Schizophrenia by Havan Fellows


Almost everyone has an interesting story to tell. I've got numerous—and they've declared war against me.


That Special Feeling by Raven McAllan


Can you carve your future happiness in a pumpkin?


Love is powerful, but is it strong enough to raise the dead?


Make me a Sandwich by Lee Brazil


When his roommate is away, distraction is just a horror movie away for Gregory...until the things that go bump in the night take over.


Can Arabella reach sanctuary, or will her dreams become reality?


Spin the Bottle by Raven McAllan


Aeons ago, Attric had been banished in disgrace. Halloween gave him the chance to redeem himself. Would he? Or was he doomed to live in a bottle forever?


The Birthday by Dianne Hartsock


Every birthday Cyrus visits the dance clubs with a surprise for the young men. This year, the tables are turned.


Hunted through the night by a terrifying creature a young girl refuses to give up, but her strength will be her curse.


As a new Reaper of Souls, Kale knows who Death is. He just isn't used to Death showing up in his dreams. When he does, Kale learns that attraction, even in dreams, can be very real indeed...


The Fog by Lee Brazil


Starting afresh in a new home in the valley should have helped Jeff leave memories of his lost love behind. Instead his dreams are filled with a passion that is terrifying in the light of day.


In the Shadows by Dianne Hartsock


He waits in the shadows; silent, hungry. Careful! He might be watching you.

There is only one excerpt for this one.


His squirming movements created unbearable friction, and I traced a hand down the tight denim to capture a taut buttock and hold him still against me while I thoroughly explored the wet cavern he’d granted me access to.


I drew away and stared down at him. “I wanted to do that the first moment I saw you at my resting place.”


Awakening at moonrise to find such a tempting morsel in my tomb had been a delicious surprise. His flight across the graveyard had been invigorating.


“Yeah.” His breathy agreement made me smile again

Lee Brazil: I'm an avid reader and former teacher of grammar and composition who believes that falling in love is the grandest adventure anyone can have. In a nutshell, that's every story I have to tell.


Relocating from the crazy pace of life in Southern California's Orange County to the beautiful and leisurely atmosphere of the Illinois countryside has given me the time to indulge the desire to write, which I'd set aside when I started teaching fourteen years ago. Readers can find out more about me and my writing by visiting my blog, Lee's Musings, or finding me on Facebook. Feel free to drop me a line at lee.brazil@ymail.com.


Havan Fellows: Something about me?  Hmm…well I'm a mild mannered person with an imagination that makes me blush, and I'm itching to get under your skin as we speak.  I thoroughly love getting lost in a book or two and pray for the day my kiddos or family won't find me there.  I write with the group Story Orgy and hope to continue doing so for a long time and I follow my muse where ever he takes me … he hasn't failed me yet!  And just like every other red blooded human – I love hearing from people.  So feel free to drop me a line – whether it's a comment on my blog, an email, a tweet or you track me down on FaceBook or Google +…it's easy to catch someone who wants to be caught.


I annoy, love, respect, scare, seduce, hurt, anger, infatuate, frustrate, flatter, envy, amuse and tolerate everyone. I just do it better in writing thanks to a little thing called...edits.


Ravan McAllan: Raven lives in Scotland, along with her husband and their two cats—their children having flown the nest—surrounded by beautiful scenery, which inspires a lot of the settings in her books.


She is used to sharing her life with the occasional deer, red squirrel, and lost tourist, to say nothing of the scourge of Scotland—the midge.


A lover of reading, she appreciates the history inside a book, and the chance to peek into the lives of those from years ago. Raven admits that she enjoys the research for her books almost as much as the writing; so much so, that sometimes she realizes she's strayed way past the information she needs to know, and not a paragraph has been added to her WIP.


Dianne Hartsock: After growing up in California and spending the first ten years of marriage in Colorado, I now live in the beautiful Willamette Valley of Oregon with my incredibly patient husband, who puts up with the endless hours I spend hunched over the keyboard, letting my characters play.


I have to say, Oregon's raindrops are the perfect setting in which to write my slightly twisted tails. There's something about being cooped up in the house while it pours rain outside, a fire crackles on the hearth inside, and a cup of hot coffee warms my hands that kindles my imagination.


The intricate and fragile nature of the mind is always fascinating. Having worked with the public through various careers, I've come to respect the resilience and strength of the human spirit. I'm always trying to capture that spirit in my writing.


Currently I work as a floral designer in a locally owned gift shop, which is the perfect job for me. When not writing, I can express myself through the rich colors and textures of flowers and foliage.


My first publication was Shelton in Love from Breathless Press, released May 13th, 2011.


Doris O’Connor: Glutton for punishment would be a good description for Doris... at least that's what she hears on an almost daily basis when people find out that she has a brood of nine children, ranging from adult to toddler and lives happily in a far too small house, cluttered with children, pets, dust bunnies, and one very understanding and supportive husband. Domestic goddess she is not.

There is always something better to do after all, like working on the latest manuscript and trying not to scare the locals even more than usual by talking out loud to the voices in her head. Her characters tend to be pretty insistent to get their stories told, and you will find Doris burning the midnight oil on a regular basis. Only time to get any peace and quiet and besides, sleep is for wimps.


S.J. Thomas: I believe in love at first sight and instant attraction. I love strong possessive alpha males and the feisty heroines (or heroes!) who bring them to their knees. I read, write and breathe paranormal romance and erotica with occasional forays into paranormal horror and sci fi. Come find out more with excerpts from my writing together with some fun things on my Facebook Page www.facebook.com/sjthomaswpr or website.


Jamieson Wolf: Jamieson has been writing since a young age, when he realized he could be writing instead of paying attention in school.


Since then, he has created many worlds in which to experience his fantasies and live out his dreams. He is the author of many best-selling works including Cupid's Delight, Starlight Starbright, and The Awakening. His best-selling Hard Series includes Hard, Hardening, Harder, Hard Glory and Hardest.


He currently lives in Ottawa, Ontario with his his cat, Mave, who thinks she's people.