The Not-So Dead by Isaiyan Morrison Meet the Characters (Faye)

✦•°•✦ A THRILLING Free Read!!! ✦•°•✦
Faye by Isaiyan Morrison
The Amazing Isaiyan Morrison is going to be introducing us to some new characters every two weeks so we can get to know them a little better. These awesome characters will be in her upcoming all new paranormal/urban fantasy trilogy The Not-So Dead. The first full length title in the trilogy will be releasing in Jan 2020
So if you’re ready to meet these new characters and the world they live in
CONTINUE READING!!! 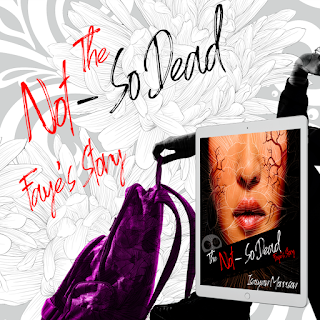 The first character we get to meet is Faye
Faye Cox
Nationality: American
Ethnicity: Asian
Height: 5’6
Hair Color: black
Eye Color: brown
Faye Cox is the youngest member of a nomadic family of wraiths.
Growing up sheltered in Austin, she has no knowledge of the supernatural world which exists outside her bedroom walls. A gamer, she’s more comfortable playing games with her friends online than being outside among crowds of people.
Her older sister has always been her best friend and when she returns for college break, she and Faye decide to spend the night out, when a wraith crosses their path.
Hobbies: Video Games and Manga
Characteristics: Cheerful
Moral: Sanguine: Sanguine or upbeat people look on the bright side – they’re ‘glass half full’ types who tend towards cheerfulness and usually bounce back easily from setbacks.
Pet Peeve: Dying batteries
Okay I don’t know about you, but I can’t wait to read more about these characters and their journey.
Below you can find an Excerpt from The Not-So Dead (Book 1)
Available January 21st, 2020
Amazon

As she moved her way with uncertainty about the city, Faye’s hunger only grew. She still felt the essence of the guy she almost killed and part of her wanted more. Yet, she couldn’t just leech off anyone. She thought about their families, their loved ones, and significant others.
She wasn’t like Maddy or Tristan. They never thought twice before doing what came naturally. She never wanted to be that way but, if it came down to it, there wasn’t any other choice. She blamed the wraith who made her into an almost unstoppable killing machine.
The idea that dark magic was the source of this energy inside her boggled her and the more she thought about it, the more she wondered if there was the possibility to be cured from it. Maybe it was like some disease passed from person to person and somewhere, out in the world, someone had the antidote. Carter appeared to know more than any average human did about the supernatural, so maybe… just maybe… he had the answer.
This pushed her to find him, but how?
She remembered the night they bumped into each other. He came from the direction she was now heading to, but there were many apartment buildings on that street and the next.
I should’ve thought this through.
All the while watching her back, she continued on and reached a less busy area of Hueman; a part she’d never visited before. It was the older part of the town, complete with rundown boarded buildings and red brick streets. Completely deserted with no apartment buildings in sight, she crossed the street and began to make her way back.
“Spare change?”
A homeless man sat with his back against a tree with a pile of dirty blankets on his left and an old grocery cart on his right. A gnarled beard clung to his chin and sunken cheekbones, and a few buttons held together his ratty and dirty shirt.
“Excuse me?”
“Spare change?” the homeless man said again.
Faye dug into her backpack for a few bills when she realized they were the only two individuals on the street. He was what her nomadic family called a perfect source: alone, unwatched. These were the type of humans that no one missed, if a wraith wanted to take more than allowed. Or if a wraith just wanted to take a little, they could and leave their victims in a catatonic state. It was how Dusk found Essie but instead of leeching from her, he accepted her into the family.
Faye grabbed his hand but when she took a closer look, she noticed that his hazed eyes weren’t locked on her. Instead they stared off to the side. He was blind and that would’ve made leeching from his easier, except for the fact that her humanity prevented her from doing so.
“I’m not a monster,” she whispered and drew her hand back. It was one good rule that Dusk taught her.
“What?” he asked.
But he was too perfect! He couldn’t tell anyone what she looked like and if he screamed, no one would hear him. Unbearable, her hunger pushed aside her humanity and she took his hand again. Instead of pleasure, she felt a sinking feeling in her stomach as he tried to slip his hand away.
The leeching started off slowly. The first drops told her everything she needed to know about his essence. It was like drinking old alcohol and it also reminded her of the brussel sprouts her mother forced her to eat when she was a kid. She loathed them just as much as she loathed her victim’s nauseous energy.
“Let… let go of me.” He tried to draw his hand back again, but there was no way he could compete with her strength.
“I’m sorry, just a little more.” She focused. “The harder you fight against it, the more it’ll hurt you.” She encouraged the warmth of his energy and kept drawing more and more until his hand went limp and his body slumped forward.
She let go and caught him before he fell to his side. “I’m sorry.” She propped him up against the tree. A string of drool dripped from the corner of his opened mouth. He was still alive and she let out a sigh of relief.
Finally, she was able to control how she fed. It was a start, anyway. “Thank you.” She took a few dollars from her backpack and placed them in his lap. It wasn’t much, but it made her feel a little less guilty.
Now she could begin looking for Carter again, or so she thought until she saw the one person she didn’t want to run into, alone.
He stood down the street, about twenty feet ahead with a long sharp stake in his right hand and a crossbow in his left. Faye froze as soon as she saw him. He wore the same oval mask and clothing he did when she first saw him. His red shard necklace adorned his neck and it moved slightly, catching the moon’s glow.