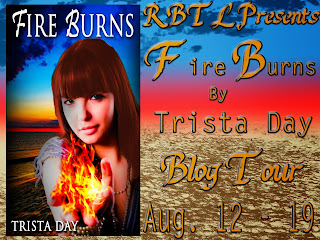 Blurb/Synopsis: Callie Demasi just started her senior year at Crystalport High and her life couldn't be any more ordinary. Then the nightmares start, and a strange creature tries to attack her in her sleep. If that isn't bad enough, her body starts to do things she never imagined were possible; like hold fire in the palm of her hand. It seems that the only person who knows what's really happening to her is a ghost creature named Draven - if she can keep him from disappearing on her. It's not until after her best friend Zilla is kidnapped, and she meets the handsome and arrogant Cole, that Callie begins to put the pieces together. Will her newfound powers be strong enough to save the life of her BFF, or will they both be doomed to the same fate?

Sweat beaded on Draven's forehead and trickled down to the ground with a heavy thump as he paced restlessly in front of a pair of massive wrought-iron doors. They were the color of red clay, dirty and swirled with rust. An odd metallic tang permeated his nose and tongue as he scooted closer. Years of humidity and dampness have been unkind to this place, he thought to himself.

He had been working grueling hours as a digger the past few weeks down in the catacombs. It was the same old routine as he mindlessly shoveled mounds of dirt from one pile to the next while his legs and arms begged for him to stop. As he was getting ready to leave his shift, he overheard whispers that Thanatos had summoned Circe to his castle and that she had arrived early this morning. Or was it morning? He didn't know anymore, it was always black as night here in this forsaken place. Draven knew firsthand what cruel things Circe was capable of. You see, Circe was a witch; the kind that buzzed with such enormous power she almost surpassed Thanatos-almost being the key word. She had a reputation for being the purest form of evil and after what she had done to him; there was no doubt in his mind about her true nature. He shivered just thinking about her.

Thanatos was much worse. He’s the devil incarnate, literally, and has ruled the Kingdom of Sheol with an iron fist for many decades. So frightfully powerful that even Circe knew when to bow down to him.

Draven shook all of the thoughts and doubt from his mind as he stepped up to the doors. He carefully cracked them open and placed his ear near the hole. Whatever the two of them were planning, it wasn't good.

"What is it you're going to ask of me this time?" he heard Circe cackle.
"Do you remember my most prized pupil?" Thanatos inquired.
"Yes, I remember her quite well," Circe replied.
"Then you'll also recall how she ripped open my heart the day she fled my land and her home."
"Of course I do. How could anyone forget that terrible day." she replied with more than a hint of sarcasm.
"I have news,” he said. “Would it surprise you to know that I've finally found her? That she's settled for a lowly human? Or that she has a child?"
"It does not surprise me," she replied with distaste. "She always longed to be one of them. What I don’t quite understand is how exactly this involves me?"
"How does it ever involve you?" he said frustrated. "I need you to turn her."
"Turn her into what? A vampire? You know that won't work, she's already one of their kind."
"No, you fool," he boomed, "I'm talking about the child of hers."

Draven couldn't see what was going on in that room, but he knew Circe would be smiling. This kind of task was right up her alley.

Circe began to laugh as she said, "Of course! It would be my pleasure, anything for you my dear friend."

Draven stepped back and processed everything he'd overheard. He knew plenty about vampires from living in this rat hole. They were disgusting creatures that fed off of humans for sport. If they were going to condemn an innocent to that fate, he had to stop them. It was then that he knew what he must do; he had to leave immediately and find this child. Nobody would miss him anyway, it’s not like he had any friends here and his dad had gone missing months ago. Searching for his father would just have to be pushed to the side while he helped this child.

As Draven gathered his things to leave he thought about all of the other times he'd overheard conversations similar to this one but never acted on them. Why was this one different? He didn't know, but there was a part of him deep down that urged him forward and that was good enough for him.

I really enjoyed Fire Burns. The characters were amazing and the authors writing style kept me turning the pages. I got completely lost in Callie's story and the character. Not only do you get an amazing heroine, you also get a hot hero. Draven is definitely one of my favorites. Now not to say that I wasn't drawn to Cole character because you all know how I like those bad boys but Draven just stole a huge portion of my heart.  Luke and Callie's relationship was strange .... I cant wrap my mind around it to put it in the right frame of words. I don't know maybe I am having a moment. Don't Judge me. There is always a spike of action... which I loved. I felt like the plot completely picks up and takes off and you are on an never-ending roller coaster ride. My nerves are shot at this point, LOL. Zilla and Callie had a bond of friendship that was so amazing strong that it makes you emotional.

Overall, Fire Burns was a good story. I was able to connect with the characters and the plot was full of action. Another appealing aspect of the story was the powers the characters displayed. You all should know that I love anything that is paranormal and has magic in it. Especially magic powers. Every now and again I want to Zap someone ( like poof be gone, I am busy here) But I am a puny little human with out powers. So a girl has to dream and live those powers through awesome stories like this one, LOL. In the end your left wanting more because the book ends as the plot begins to stir.

I rated this book 3 1/2 out of 5 Purple Rant Hearts and would recommend this book to anyone that loves a good YA adventure story. 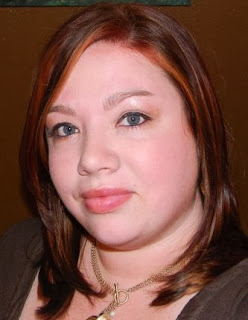 Trista Day is a married 29 year old mother of two with an obsession for collecting anything Alice in Wonderland and The Labyrinth. In between eating too much chocolate and watching The Fifth Element, she loves to read and write young adult/teen science fiction, fantasy and paranormal romance.