Author: Theresa Jones
Genre: YA Paranormal Romance
Book Excerpt: Thousands of years after the battle between the angels, when Lucifer was defeated by Michael in the Heavens, the war is still being fought on Earth by the humans who have their Power, the Angel’s Power.


Allison Stevens is a 21 year old single mother who gets thrown into the middle of this battle when Damien, the Leader of the Rising, decides to hunt her down and kill her because he fears she is the descendant prophesied to save the world.


David, a member of the Order, takes Allison under his wing in order to show her the ropes, and hopefully groom her into being the one they have been waiting for. The only problem is that they start to grow more attached than a teacher/student relationship should allow.


But that isn’t all. Damien wants to open the Seven Seals and bring about the apocalypse and it’s up to Allison to not only save herself and her family, but save the world, all while trying to keep her heart from breaking.


No problem… right?
My Rant:

I was infatuated with this story. It was an easy ready and I could barely put it down.  I am all about having power. Lol. The story was compelling and I was able to connect with the characters especially Alison. She was strong brave and determined. The book was just amazing; I mean it made me feel like a child again. When I was young I loved anything that had to so with special powers and magic. I was fascinated by it and this book just captures those feeling for me.  The romance with Davis was just too much. My heart just fluttered and sped up every time he graced the scene.


“Holding my hands in his, David kissed my knuckles before he swore to me, “I will love every day of the rest of my life.”


I swear I love, love sexy male characters. The action was on point and I was at the edge of my seat. You feel a rush of emotions exploding within you. The plot was compelling and creative and everything I hoped it would be. I love power so much that I am adding it to my favorites list and I look forward to the future installments in this trilogy.

I rated this book 4 out of 5 purple rant hearts and would recommend this book to anyone that enjoys a plot where good versus evil in a magical storm of battles with off the chart romance. 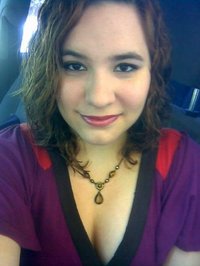 Theresa M Jones is just a regular small town, Texas girl. When she isn't at work at a local Medical Equipment provider,you can find her at home with her husband and two beautiful (and rambunctious) kiddos.

In her spare time- as if there ever was such a thing as "spare time" - she reads and reviews books on her book blog, and writes paranormal romance novels.

POWER (The Descendent Trilogy #1) is her debut New Adult (Mature YA) Paranormal Romance novel.
You can follow Theresa Jones by the links below:


Blog: Keepin Up with the Joneses In the Book World

Posted by Crystal Rants at 8:49 AM